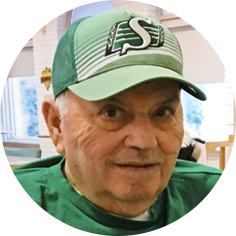 Grant Alden Hutchinson, aged 84 years of Moose Jaw, SK passed away on Saturday, September 15th, 2018.  Grant was born in 1934 to Leslie and Stella Hutchinson, the youngest of 5 children.  They lived at Briercrest, SK and then moved to the Archive District where they farmed and shipped milk.  They later moved to the Buttress District where they continued farming. Grant attended Newberry School. He married Shirley Stratford in 1953 and together they raised 5 children.  Grant worked at many different jobs but he always came back to farming. He worked for Perrinie Construction driving a Euclid earth mover while they were building the South Saskatchewan River Dam.  He brought the first grain trailer into Moose Jaw, a flat bottom which had to be shoveled out by hand. He hauled grain, and later livestock to Sioux City, Iowa. At one time, Grant worked on an oil rig in the hills north of Crestwynd.  He retired from farming in 2005. Grant loved to travel. He and Shirley made many trips to Las Vegas and also to the west coast, a trip to Nashville with brother Alan and Joy, and also a Caribbean Cruise. He was predeceased by his parents; daughter, Linda; son-in-law, Jim Johnson; brothers, Russel and Alan; brothers-in-law: Mel Hales, Barry Stratford, and Bill McHolm; and sisters-in-law, Edna and Peggi McHolm.  Grant is survived by his wife, Shirley; sons, David (Sandi) and Mike (Trish); daughters, Diana (Les) Woodrow and Bonnie Johnson; seven grandchildren; eleven great-grandchildren; brother, Bill (Kathy); sister, Kathleen Hales; brothers-in-law, Gordon (Eileen) and Ted McHolm; sisters-in-law, Florence and Joy Hutchinson; as well as numerous nieces and nephews.  The Funeral Service will be held on Wednesday, September 19th, 2018 at 2:00 p.m. in Moose Jaw Funeral Home.  Dave Foley will officiate and interment will take place in Sunset Cemetery at a later date.  In lieu of flowers, donations in Grant’s name may be made to The Moose Jaw Humane Society, Box 1658 Station Main, Moose Jaw, SK S6H 7K7.  Arrangements are entrusted to Moose Jaw Funeral Home, 268 Mulberry Lane. Gary McDowell, Funeral Director 306-693-4550 www.moosejawfuneralhome.com