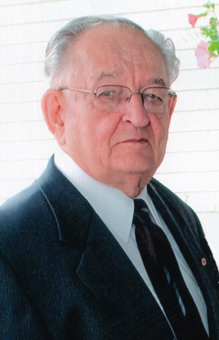 Morris Stanley Zakreski, aged 95 years of Moose Jaw, SK passed away on Tuesday, November 2nd, 2021.  Morris was born in Alvena, SK, where his grandmother and grandfather started farming in 1899.  He married Natalie Pidskalny on October 8th, 1950 and taught school for a number of years in various areas of the Cudworth area.  In 1958, Morris was employed as Secretary Treasurer for the Gull Lake School Unit, eventually moving permanently to Moose Jaw in 1961 where he was employed by The Thunder Creek School Unit until his retirement in 1989.  Morris liked to stay busy.  He was appointed Justice of the Peace in 1964, a District Coroner in 1968, and Marriage Commissioner in 1980.  Upon his retirement he continued with these appointments.  Morris and Natalie enjoyed travelling throughout Canada and internationally.  He was an avid reader, enjoyed fixing up vintage vehicles, was very social and involved in the community, and loved his children, grandchildren, and great-grandchildren dearly.

Special thank you to the staff at West Park Crossing for the excellent care provided to Morris.

The Funeral Service will be held on Monday, November 8th, 2021 at 11:00 a.m. in Moose Jaw Funeral Home.  Deacon Lamont Dyck will officiate and interment will take place at Moose Jaw Funeral Home Indoor Columbarium.  Those not able to attend in person are invited to watch the service virtually by going to www.moosejawfuneralhome.com/webcast/.  In lieu of flowers, donations in Morris’ name may be made to the Alzheimer Association of Saskatchewan, 301 – 2550 – 12th Ave, Regina, SK S4P 3X1.  Arrangements are entrusted to Moose Jaw Funeral Home, 268 Mulberry Lane.  Todd Sjoberg, Funeral Director 306-693-4550