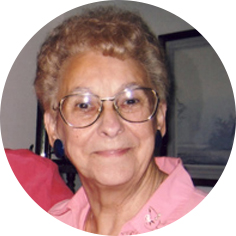 Lillian Georgette Marie (nee Peltier) Wilson passed away at Extendicare, Moose Jaw, on Monday, June 9th, 2008. The Funeral Service will be held on Saturday, June 14th, 2008 at 2:00 p.m. in Moose Jaw Funeral Home with Father Tony Sevali officiating. A time of Visitation for family and friends will be held on Thursday, June 12th, 2008 from 7:00 to 9:00 p.m. in the Moose Jaw Funeral Home. Lillian was born on February 13th, 1930 in Coderre, Saskatchewan. On October 30th, 1946 she married Malcolm (Mac) Wilson and enjoyed over 61 years of marriage. Lillian and Mac spent their early years farming and ranching in the Coderre area, until Mac rejoined the army in 1949. The army years had them posted twice in Calgary, then Moose Jaw, Whitehorse and Regina. They ended their military travels in 1959. Mac and Lil owned several businesses; a garage in Calgary, a General Store in Quinton, hotels in Weekes, Englefeld, Hendon, Meacham; an apartment building in Moose Jaw; a motel, garage and restaurant in Englefeld. Upon retirement they settled in Moose Jaw.  Lil will be remembered for her love of life, laughter, her sense of humour and the generosity she shared with family and friends.  Lil was predeceased by her parents, Eugene and Germaine Peltier, sisters Diane and Lillian; daughter Linda; and great granddaughter Lacey. Lil is survived by her husband Mac; children, Gloria (Stewart) Scott, Brenda (Doug) Grisdale, Deborah (Barry) Allen, Mona (Brent) Schultz and Douglas (Christine) Wilson; 11 grandchildren and 12 great grandchildren; brothers Oliver, Louis and Richard; sisters Olive, Pauline, Aline and Bernice. Lil was treasured by her husband Mac, and will remain in his and their children’s hearts forever. Her grandchildren and great grandchildren will remember her smile, hugs and her inspiration for life. Lil’s greatest accomplishment is the memory we each hold dear of her in our own special way. In lieu of flowers, memorial tributes in Lil’s memory may be made to Moose Jaw Royal Canadian Legion, Branch #59, 268 High St. West, Moose Jaw, Sask. S6H 1S8.