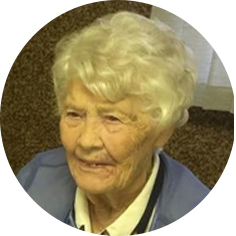 On Friday, March 23rd, 2018, at the age of 103 years, Iva passed away at Regency Manor in Central Butte, SK.  Iva was born on February 20th, 1915, the first of four children born to homesteaders Sydney and Margaret Watkins.  She was predeceased by her parents; husband, Harvey Willard (1971); daughter, Shirley Symenuk (2004); sister, Mary Meehan; and twins, Richard Watkins and Kathleen Olson.  Iva was born on the Watkins homestead and attended school in Mawer, SK.  Growing up on the farm, she helped her dad with the horses and cows and her mother with the chickens, garden and younger kids.  She especially loved playing ball and going to the many sports days, Sunday School picnics and Christmas concerts.  Iva curled throughout her lifetime until she threw her last rocks at age 80.  She married Harvey Willard in 1935 and had 3 daughters: Shirley, Wendy, and Nona, and 1 son, George.  She moved from Mawer to Butte in 1970 and Harvey passed away in 1971.  Iva lived close to the Golden Rule: Do unto others as you would have them do unto you.  She cared for her mother (Gramma Watkins) until her death in 1991, and helped care for her son-in-law Mike who was wheelchair bound.  She babysat grandkids and great-grandkids.  Her love and caring for family was endless and she had a kind word for all…even strangers.  Meanwhile, she travelled extensively with friends and family to Great Britain, Europe, the Maritimes, the U.S. and all over Canada and Mexico.  She continued her love of ball and became known by her grandkids as Gramma Blue Jay.  Iva loved to read, garden, do crosswords and play scrabble.  She enjoyed her friends, Tuesday Rummoli days, bingo nights, and playing cards at the Seniors Center.  In 2008 Iva moved into Iver Main Place, and then in 2016 to Regency Manor.  Iva will be lovingly remembered by her family: Wendy (Fred) Schweiger, George (Myrna) Willard, Nona (Bob) Toth, and son-in-law, Din (Florence) Symenuk; grandchildren: Ken, Doug, Sherri, Michele, Christy, Sandy, Brian, Sean, Shannon, Lori, Lindy, and Rob; great-grandchildren: Denver, Stacy, Jesse, Ashley, Kelsey, Johnathon, Amy, Baydin, Jordin, Morgan, Mason, Marley, Ainsley, Esme, Sullivan, Connor, Halle, and Mya; and great-great-grandchildren, Deacon, Logan, and Kensley; as well as her many nieces and nephews.  A Celebration of Iva’s Life will be held on Saturday, June 9th, 2018 at 2:00 p.m. in the Central Butte Seniors Citizens Centre.  The family would like to thank the staff at Iver Main Place and Regency Manor for the wonderful, loving care they gave to Iva over the last several years.  As an expression of sympathy, donations in Iva’s name may be made to Central Butte Iver Main Place, Box 550, Central Butte, SK S0H 0T0.  Arrangements are entrusted to Moose Jaw Funeral Home, 268 Mulberry Lane.  James Murdock, Funeral Director 306-693-4550