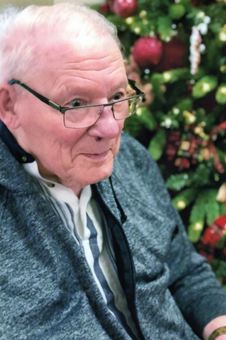 Lou Trudel passed away peacefully on Monday, December 6, 2021 at the age of 93 years at Extendicare Moose Jaw.  Lou was born at St. Malo, MB on August 15, 1928.  He is predeceased by his parents, Joseph and Cleóphee Trudel; older sister, Denise (Paul); brothers, Johnny (Theresa), Rodger (Leona), Gilbert (Helen), Richard, Réne and Marcel (Claire).  Lou will be lovingly remembered by his wife, Anna of 70 years; daughter, Carol (Bill) McCreary and sons, Laverne (Val) Trudel and Dwayne (Sheena) Trudel.  He will be dearly missed by his grandchildren: Daniel, Aaron, Jason and Michelle, as well as his seven great grandchildren: Tahlor, Taisley, Colton, Anna, Silas, Crue and Archie.  Sisters, Murial (Barney) and Claudette (John) and brothers, Guy, Raymond (Yolande) and Riel (Janette) as well as many nieces and nephews, friends and family. Lou’s work journey began in Saskatchewan in 1949.  He worked on Highway #1 from Herbert to Rush Lake, later settling down in Morse, SK, where he met the love of his life, Anna Gammel.  Together they ran the Purity 99 Garage in Morse for 12 years.  After they sold the business, Lou went and worked as a heavy duty mechanic with the Herbert School Unit.  In 2000 they moved to Moose Jaw, where he finished his work career at the Moose Jaw Co-Op Grocery Store.  Due to his health starting to fail, he moved into Extendicare in August 2019.  A Celebration of Life to honour Lou will be announced at a later date.  Donations in Lou’s memory may be made to The Canadian Diabetes Assoc. 919B Albert St Regina, SK S4R 2P6.  Arrangements are entrusted to Moose Jaw Funeral Home, 268 Mulberry Lane.  Andrew Pratt Funeral Director 306-693-4550