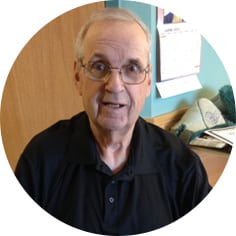 Edward George Tremblay passed away peacefully on October 11, 2019 at Providence Place in Moose Jaw, SK.  With faith in his heart, and rosary in hand, he will be welcomed into his heavenly home. Born in  Courval, SK. on July 9, 1940, the tenth of eleven children, he spent his younger years surrounded by family  and community.  As a teenager, Ed moved to Moose Jaw where he met Faye Hassen  who would be  his wife for 44 years.  They were married on July 9, 1960 and welcomed a daughter, Sandra, in 1961. Ed began his long work career at Providence Hospital before being employed with the Moose Jaw Public School Board.  He was happiest when he was with family and friends.  He spent many hours coaching  on the softball field, later attending events and supporting his grandchildren in all of their activities.  After retirement,  Ed volunteered at Providence Place which continued until his passing.