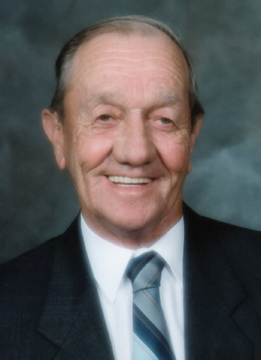 With profound sadness and love, we announce the passing of Edward Eugene Leon Tinant.  He left us, peacefully at home in Moose Jaw, Saskatchewan, on Tuesday, October 25th, 2022.

Edward was born in Vanguard, SK on October 9th, 1932 to Yvonne (Coumont) and Auguste Tinant.  He grew up on the family farm in the Esme district.  He was the youngest of 3, growing up with two older sisters, Anita and Renée.  After his father’s passing in 1954, Ed continued to work on the family farm near Ponteix, SK until 1960, when he and his mother moved back to Vanguard and he began work with the Co-op in Hodgeville, SK.  In 1962, Ed and Roy Anderson opened a garage business which formed Anderson and Tinant Company.

While in Vanguard, Ed met the love of his life, Grace, and was married shortly after in 1963.  They welcomed their first daughter, Marie in April of 1966.  Later that year, they moved to Moose Jaw where they opened their own business C & T Grocery.  They later welcomed their second daughter, Glenda, in December of 1969.  Ed continued to run their family grocery business until 1991.

Ed lived an incredible life as a wonderful husband, father, grandfather, mentor, and entrepreneur.  He had a passion for many things, and a way of making you appreciate the simple things in life.  Ed was best known for his heart of gold, having the best candy store by many, a fun uncle by his nieces and nephews, and a giver of the best advice.  Most of all he loved his family and friends and instilled good values.  He will be dearly missed and forever in our hearts.

Ed enjoyed spending time with family, tinkering with tools in the garage, going for coffee with his breakfast crew, watching Jeopardy, Wheel of Fortune, and The Big Bang Theory, as well as going to the Co-op daily – the cashiers knew his Co-op number by heart.

He was predeceased by his parents, Yvonne and Auguste Tinant; sisters, Anita and Renée; and brothers-in-law, Harry and Art.  Ed is survived by his loving wife and best friend of 59 years, Grace (née: Cisek); daughters, Marie (Steve) Griffiths and Glenda Tinant; grandchildren: Jennifer Griffiths, Corallee (Spencer) Bushell, and Ryan Griffiths; as well as many nieces, nephews and friends whom he loved.

A Celebration of Edward’s life will be held on Friday, November 4th, 2022 at 11:00 a.m. in Moose Jaw Funeral Home with Father George Thattuparampil officiating.  As an expression of sympathy, donations in Ed’s name may be made to the Heart and Stroke Foundation, Unit 26 – 1738 Quebec Ave, Saskatoon, SK S7K 1V9.  Arrangements are entrusted to Moose Jaw Funeral Home, 268 Mulberry Lane.  Michelle Ellis, Funeral Director 306-693-4550