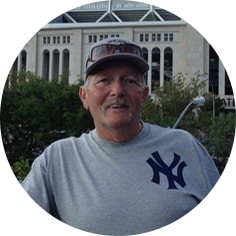 Thomas Peter Thul, born January 18, 1947 in Moose Jaw, hailing from Marquis passed away peacefully surrounded by his family on August 28, 2019. Tom was predeceased by his mother Olive, his brother Bill, his father and mother-in-law Mike and Bernice Knapik, brother-in-law Gerald and sister-in-law Barbara.

Tom’s biggest love in life was his wife and family, there were not many times he was seen without his children in tow, and later his grandchildren.  He was an avid hunter and fisherman, and an accomplished sportsmen throughout his life. Tom was a huge sports enthusiast, particularly when it came to his Yankees and Canadiens.