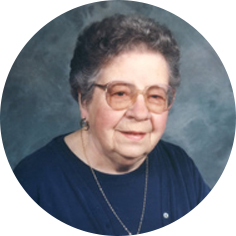 It is with great sadness that the family wishes to announce the passing of Simone Florence Stewart on Sunday, April 27th, 2008, after a three week stay in the Union Hospital and will now be rejoined with her husband Lloyd (1961) and grandson Erik (1996). Mom was predeceased by Lloyd; sisters Sara and Beatrice; brother Roger; and grandson Erik. She is survived by her daughter Shery (Bjarne) Sorensen of Delta, B.C. and their daughter Marcy (Stephen) Balzer of Abbotsford. She is also survived by her son Gaye (Friend Sandy) and his daughter Courtney (Friend Lyndon) and Courtney’s Mom Deb Stewart and her daughters Amie and Jaime; brother Norman (Georgette) Raymond of Montreal; as well as numerous nieces, nephews and special friends Greg, Pam and Rose Mary. Mom was born in Storthoaks, Sk. on July 22nd, 1915 and moved to Moose Jaw in 1955 where she and Dad both worked at the Sask. Training School (Valley View Centre). Mom was a very strong and independent lady, raising two young children on her own after the death of her husband. She loved to play cards especially with her grandchildren and family. Mom has resided at the Mulberry for six years until her passing. She had many special friends during her life and made more since living at the Mulberry. She loved her time playing Scrabble with John and Ed and the socializing at mealtime. Thank you to all the staff at the Mulberry for your companionship and to Dr. A. Van Heerden and the staff on Medicine for their compassion. A Prayer service will be held on Tuesday, April 29th, 2008 at 7:00 p.m. in Moose Jaw Funeral Home. Mass will be celebrated on Wednesday, April 30th, 2008 at 1:30 p.m. in Church of our Lady, 566 Vaughn St. Fr. Tony Sevalli will be Presiding Celebrant and interment will take place at Rosedale Cemetery. For those so wishing, memorial donations may be made in Simone’s name to the Canadian Cancer Society, 61B Ross St. W., Moose Jaw, Sask. S6H 2M2 or to White Fathers, 228 Hamel Ave., Winnipeg MB, R2H 0K6.