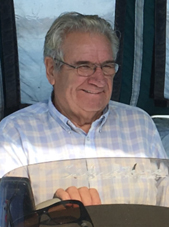 Don Stephens, aged 78 years of Moose Jaw, SK passed away on Tuesday, February 2nd, 2021 following a very determined and courageous battle with Covid-19; and as such, was the character of Don.  At the age of thirteen, when his family returned to the Maritimes, Don stayed in Moose Jaw, SK going to school, working, marrying, and raising a family.  Don’s determination, mechanical aptitude, and an absolute need to know attitude, supported him throughout his life.  He taught himself the computer, built a wood splitter, repaired anything and everything for family and friends…Don could pretty much do it all.  He enjoyed gardening, summer at the lake, giving rides on his pontoon boat, coffee uptown with Gladys to catch up with friends and acquaintances, and as a complete surprise to his family, was drawn to Craven in his later years.  Don had a fantastic sense of humour, usually at everyone else’s expense.  When his daughters would raid his beloved greenhouse, he would pretend to be flabbergasted, and then state “did you see the beans?”  More recently, Don found that aviation was something to become inquisitive about.  Having taken to the skies with his pilot son Blair, Don decided that following that first flight, he had better read up about it, and have a series of questions prepared for the next time up.

Left to mourn Don, are his companion of many years, Gladys Wilk of Moose Jaw, SK; Don’s daughter, Donna (Brian) and their sons Stephen (Kylie), Brennan (Krista), and Chris (Kelsi); Don’s son, Blair and his sons Shawn (Ashleigh) and Chad; Don’s daughter, Janet and her daughter Jade.  Mourning the loss of a stepfather are Gladys’ daughter, Lori; and sons, Brian and Barry.

Due to Covid-19 restrictions, a Private Family Service will be held.  As an expression of sympathy, donations in Don’s name may be made to STARS Air Ambulance, 2640 Airport Road, Regina, SK S4W 1A3.  Arrangements are entrusted to Moose Jaw Funeral Home, 268 Mulberry Lane.  Gary McDowell, Funeral Director 306-693-4550