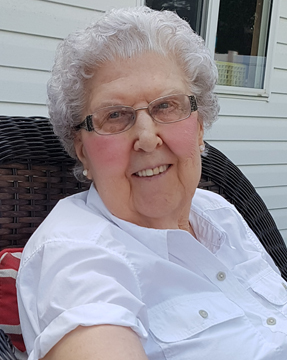 Loretta was a faith-filled woman with family as her focus.  She was a 65-year member of the CWL.  She enjoyed visiting with family and friends, especially at the Uptown Cafe, playing cards, and praying the Rosary.  Loretta’s boundless love included many special ‘adopted’ family members who called her Mom and Grandma.

Many heartfelt thanks to the cab companies (Amil’s, Capone’s and Allbility), Pioneer Lodge, Dr. Sanche and the administration assistants at Kliniek on Main, Dr. Bortolotti and the medical floor staff at the Dr. F.H. Wigmore Regional Hospital for their exceptional and loving care of Mom.

The Funeral Mass will be celebrated on Thursday, January 5th, 2023 at 2:00 p.m. at St. Joseph’s Roman Catholic Church, 1064 3rd Avenue NW, Moose Jaw, SK.  Father George Thattuparampil will be the presiding celebrant and a private interment will follow at a later date in Rosedale Cemetery.  A Prayer Service will be held on Wednesday, January 4th, 2023 at 7:00 p.m. in Moose Jaw Funeral Home.  Those unable to attend the Funeral Mass may view the service virtually by going to https://youtu.be/CsFwvo1aLS8.  Flowers are gratefully declined.  As an expression of sympathy, donations in Loretta’s name may be made to Kidney Foundation of Canada, A3-116 103 Street East, Saskatoon, SK S7N 1Y7 or St. Joseph Parish, 1064 3rd Ave NW, Moose Jaw, SK S6H 3T9.  Arrangements are entrusted to Moose Jaw Funeral Home, 268 Mulberry Lane.  Gary McDowell, Funeral Director 306-693-4550