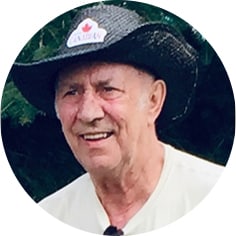 It is with sadness that we announce the passing of Robert “Bob” Sperling.  Bob was born on the family homestead near Aylesbury, SK.  He grew up on the family farm, actively helping his parents raising livestock and grain farming.  He completed his Grade 10 at Aylesbury School and then joined the Army at 17 years old. Upon joining, Bob headed to Calgary for training and then off to his first posting in Germany as a member of the Queen’s Own Rifles.  He spent 3 years in Germany and then was transferred to Victoria, BC for a few months. His last posting was in the Republic of Cyprus as a Peacekeeper for 6 months, then returned back to Victoria. Ready for change, Bob went into Commercial Fishing.  In 1979 he moved back to Moose Jaw, working at Canada Packers for over 30 years. Bob was a member of the Royal Canadian Legion Branch #59 and a Past-President of the Fraternal Order of Eagles #3395. He was an avid hunter and fisherman, loved to dance, and was known for his “Sperling Sausage”.  Bob and Bernice enjoyed travelling to Hawaii and many other states. They would have celebrated their 37th Wedding Anniversary on March 15th, 2020.  He was predeceased by his father, Joseph; mother, Frances; and step-son, Tim.  Bob is survived by his loving wife, Bernice; son, Ron; step-children: Curtis (Carol), Denise (Ed), and Tim’s wife Bonnie; grandchildren: Shavonni, Keri (Elvis), Marissa, Tiarra (Travis), Risa (Derrick), and Jeremy (Keri); great-grandchildren: Eva, Anna, Ronan, Nolan, Paizlee, Deirks, Brooks, Blake, and Cooper; siblings: Gordon, Lloyd (Denise), Janice (Larry), Seann, and Debra (Scott); as well as numerous nieces and nephews.  A Celebration of Bob’s Life will be held at a later date.  In lieu of flowers, donations in Bob’s name may be made to the Fraternal Order of Eagles Moose Jaw Branch, 561 Home St W, Moose Jaw, SK S6H 4X9.  Arrangements are entrusted to Moose Jaw Funeral Home, 268 Mulberry Lane. Andrew Pratt Funeral Director 306-693-4550