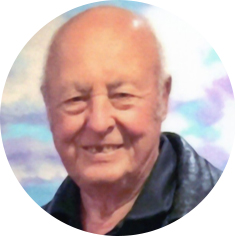 It is with heavy hearts we announce the passing of Robert “Smiley” Spencer on Sunday, October 25th, 2020 at the age of 83 years after a short battle with Kidney failure.  Smiley was predeceased by his parents, George and Mae Spencer; brother George Spencer and Sister Ellen Ball.  Dad will be dearly missed by his wife, Marie; sons, Brad (Karen) and Doug (Jill); daughter, Lori (Rob) and grandchildren: Mayson, William, Rebecca, Justin and Kelti.

Smiley was born and raised in Moose Jaw and often claimed Moose Jaw was his favorite place to live.  He worked 35 years at SaskTel and cherished the lifelong friends met at work.  He was very proud of his three children who have all followed with lengthy professional careers in Telecom, carrying on a family vocation started by his mom in 1917.

A supporter of Veterans, Smiley was a lifetime member of the Moose Jaw Royal Canadian Legion, Army Navy and Air force Veterans, and The Fraternal Order of Eagles and marked Remembrance Day and Canada Day each year by attending the cenotaph service and hosting a backyard flag ceremony.

A longtime member at the Lynbrook golf club in Moose Jaw, Smiley was an avid golfer scoring 4 hole-in ones over the years.  His favorite activity was to rise early and crisscross Saskatchewan driving “ol Blue’ to see friends and compete in tournaments, many of which he participated in for more than 50 years.

In retirement Dad and Marie took their love of golf, sunshine, and friendships south, enjoying 23 winters in Arizona with amazing Canadian and American friends, where he golfed as often as possible enjoying the memorable evenings of laughs and friendship as much as the round itself.  Smiley made friends easily through his genuine personality, infectious smile and love of people.

Smiley has left his family and many friends with stories and life long memories.

The family would like to give a special thanks to the medical staff at the Dr. F.H. Wigmore Regional Hospital for their care and support.

Due to restrictions from the current pandemic, a Celebration of Smileys Life will be held at a later date.  As an expression of sympathy, donations in Smileys name may be made to The Royal Canadian Legion Branch #59 268 High St. W. Moose Jaw, SK S6H 1S8.  Arrangements are entrusted to Moose Jaw Funeral Home, 268 Mulberry Lane.  Gary McDowell, Funeral Director 306-693-4550