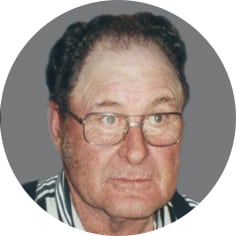 Angus Alfred Songer was born July 13, 1940 in the Riverhurst district.  In 1962 he married Beatrice Songer from Flin Flon MB.  He always called her his sweetheart. They raised three sons, Ivar, Dwaine and Danny.  Angus was predeceased by his mother and father, three sisters and five brothers. He leaves to cherish his wife, Bea and his family; many grandchildren and great grandchildren and brother, Howard from Chaplin.  Angus loved his farm and family and worked hard to provide an honest living for his family. Due to failing health, Angus chose to move to Regency Manor in Central Butte. While his time there was short, he loved all the folks there and he made so many friends.  He loved all the activities he could participate in, including bingo with Kelsey and floor curling with Brenda. After a short stay in Moose Jaw Hospital, he was transferred back to Regency Manor where he passed away very peacefully. A Celebration of Angus’s life will be held at the family farm this summer and will be announced at a later time.  In lieu of flowers, donations in Angus’s name may be made to a charity of your choice.  From his sweetheart Bea and family, we can only say thank you and God bless the amazing staff who made his life so enjoyable.  Arrangements are entrusted to Moose Jaw Funeral Home, 268 Mulberry Lane. Michelle Surtees, Funeral Director 306-693-4550.