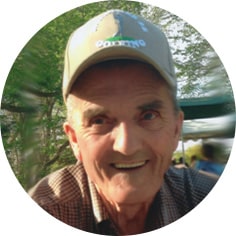 It is with great sadness that we announce the passing of our beloved Dad, Grandpa, Brother, Uncle and Friend, Harvey Douglas Smith on Thursday, April 23rd, 2020.

He was predeceased by his parents, Ted and Ann Smith; sister, Shelly Smith; and brother, Danny Smith.  Harvey is survived by his daughters: Lori (Bob), Jenny (Chad) and Amber (Graham); 6 grandchildren and 1 great-grandchild; sisters, Sheila Fedirko and Sharon (Bob) Jordan; as well as many nieces, nephews and friends.

Harvey was born in Rose Valley, SK on September 5th, 1944 to Ted and Ann Smith.  He grew up both on the farm which he loved so very much and then in Rose Valley at the family home.  Harvey attended Rose Valley School and then at a young age, began working for different farmers.  He was a very hard worker.

In October 1966, Harvey married Barbara Hiron of Rose Valley and together they shared daughters Lori, Jenny and Amber.

Harvey enjoyed going for endless drives, checking in on family and friends, watching car races at the track, loved and always looked forward to garage sales, especially going with his mom and Jean Reed as you never know what you could find, and just enjoying life everyday no matter what it threw at him.  He never got discouraged and always remained positive, with a smile on his face.  He was someone you were glad to just know because he was so very kind to everyone he met.

Harvey will be forever remembered for so many things: his infectious smile that just made your day that much better, his teasing and telling jokes, his ability to always lend a helping hand no matter who you were, always giving the best advice, his bravery, and unconditional love for his family.  He always talked about the love and importance of family, which above all else was so very important to Harvey.

We miss you every single day Dad and our hearts will never be the same.  We thank you for all you were and we love you so much.

Due to the current health situation, a Private Family Service will be held at a later date.  Flowers are gratefully declined.  As an expression of sympathy, donations in Harvey’s name may be made to Canadian Cancer Society, 1910 McIntyre St, Regina, SK S4P 2R3, The Moose Jaw Humane Society, Box 1658 Station Main, Moose Jaw, SK S6H 7K7, or to an Animal Shelter or Rescue of your choice.