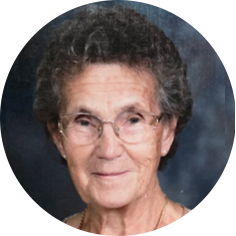 Genowefa Siebeneich, aged 86 years of Moose Jaw, SK passed away on Thursday, December 10th, 2020.  Genny was born in 1934 on her parent’s farm in Lanke Male, Poland.  On February 9th, 1954 she married Erich Siebeneich and moved to Hamburg, Germany.  From there they immigrated to Canada with four young children in 1959 and settled in Mossbank, SK.

The early years were difficult, Genowefa (Genny) worked hard at numerous jobs in Mossbank to help support the family but never complained.  The language barrier was difficult but with her strong will, taught herself from her native language of Polish to learn German and then English.  Erich was transferred to Moose Jaw in 1985 and Genny began working for Home Care until she retired.

Genny’s kitchen was always open to whoever showed up at the door, even stray animals.  She never forgot the clients she worked for and built long lasting relationships with them all.  Genny’s hobbies were tending to the garden and flowers, their apple trees and walking with her four-legged companion Missy.  She was an avid walker no matter the weather.

Genny was a gentle, kind, caring person who loved spending time with her family and grandchildren.  She was our rock and our angel.  She was a member of Emmanuel Lutheran Church but her unwavering faith was not lost during her struggle with dementia.  She always expressed her love and appreciation by saying ”Love you always”.

Genny will be lovingly remembered by her daughters: Elisabeth (Jim) Smith, Hilda, and Erika; sons: Klaus (Rose), Carl (Mel), and Eric; 10 grandchildren and 7 great-grandchildren.  The family would like to express their heartfelt thanks for the compassionate care given by Guardian Grove staff to our Mom.