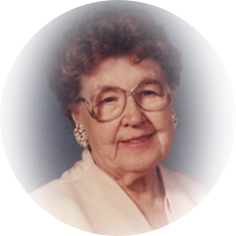 Thelma Anna Doris Sheward (nee Day) of Moose Jaw, passed away peacefully on Tuesday, January 15, 2008 at Providence Place. Born on November 26, 1910 and raised in Moose Jaw she married John Roland Sheward in Shaunavon on December 26, 1939. She will now be reunited with her beloved husband John Roland (Jack). Predeceased by her parents Alfred John Day and Annie Day, sisters: Irene, Sylvia, brothers: Don and Gord, daughter-in-law Coleen Sheward and grandson-in-law Herbert White. She will be lovingly remembered by her son Ray Sheward of Moose Jaw, sisters Joyce Cusack and Edna Ellis of Calgary, granddaughter Wanda White of Eyebrow, grandson Mike (Marci)  Sheward of Moose Jaw, great-grandchildren Ivy, Logan and Will of Moose Jaw, as well as several nieces and nephews. Mother was famous for her cooking and sewing abilities, she started working at age 14 at Eatons and then at Arons where she worked as a seamstress. She was so sought after for her skills that she made her daughter-in-law’s and granddaughter’s wedding gowns, as well as making patterns and sewing clothing for her family and friends, she was always busy on some fabric project and was constantly shopping at the Army & Navy picking up some new material for a someday project, you never know when you might need some fortrel pants. She enjoyed baking and was known for her no-fail pie crust – a trait that she passed on to the younger generations along with some sewing skills. She was an avid crocheter and was always turning out a table cloth or doilies for friends and neighbours. She was very active in the St. John’s Anglican Church  and taught Sunday School for many years as well as being a loyal member of the congregation. She took special joy in visiting with her family and friends. Her laughter and smile will live in our hearts forever. The Funeral Service will take place on Monday, January 21, 2:00 p.m. at the Moose Jaw Funeral Home. David Carter will officiate.  A private family Interment will follow at Rosedale Cemetery. In lieu of flowers, donations may be made to the Heart and Stroke Foundation.