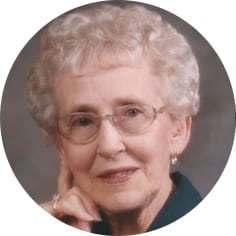 Doreen Rogers, aged 94 years of Moose Jaw, SK has reunited with her husband of 49 years on Wednesday, May 15th, 2019.  She was predeceased by her husband, Ken; sister, Myrtle (Ray) Sapp; brothers, Howard (Hazel) Eves and Gordon (Irma) Eves; brothers-in-law, John (Mabel) Rogers and Tom (Irene) Rogers; and sister-in-law, Hazel (Art) Couzens.  Doreen will be missed by her daughter, Carol (Wilfred) Hardy; son, Lorne (Jan) Rogers; grandchildren: Valerie Hardy (Bruce Mathewson), Carolyn (Hans) Tschechne, Barb (Donald) Lair, Kevin (Amber Coates), and Sean (Jennifer); 12 great-grandchildren and 3 great-great-grandchildren; as well as many nieces and nephews.  Doreen was in the Air Force from 1943 to 1945. She married Ken in November 1945 and spent her life on the farm. Her priority was raising her family. Her home and yard were immaculate, she was involved in feeding the young chickens and turkeys, growing a big garden, cutting grass, and driving the truck at harvest time.  Ken and Doreen moved to Moose Jaw in 1980. After Ken’s passing, she moved to Athabasca Towers, then to Mulberry Estates, and finally to Chez Nous. She found her second family there as she enjoyed all the “Caregivers” as they were her “Friends”. Our hearts go out to all the staff for their love and caring that they gave Doreen.  A Celebration of Doreen’s Life will be held on Tuesday, May 21st, 2019 at 2:30 p.m. in Moose Jaw Funeral Home.  Celebrant Dave Foley will officiate and a private family interment will take place at Sunset Cemetery.  As an expression of sympathy, donations in Doreen’s name may be made to the Alzheimer Association of Saskatchewan, 301 – 2550 – 12th Ave, Regina, SK S4P 3X1.  Arrangements are entrusted to Moose Jaw Funeral Home, 268 Mulberry Lane. James Murdock, Funeral Director 306-693-4550

Leave a Reply to Bev and Doug Yates Cancel reply