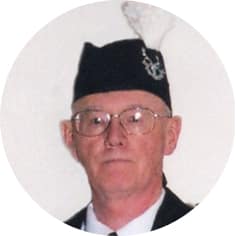 James Ritchie (Jim), aged 79 years of Moose Jaw, SK., passed away peacefully at Pioneer Lodge Moose Jaw, on Thursday, May 30th, 2019.  Jim immigrated to Canada in April 1956 with his Mum and three siblings to join their dad who had set up the family home in Moose Jaw.  Jim graduated from Peacock Technical School. In 1959 he began his training as a Psychiatric Nurse (RPN) at the Saskatchewan Training School (Valley View Center), obtained his Registration as a Psychiatric Nurse in 1961.  He retired in 1995. His nursing skills and dedication speak for themselves as shown by cards and notes received from loved ones of those he cared for, and voiced by past students, who are grateful to him for the mentoring they received.  He was a talented individual, teaching himself to play the guitar, his choice of music was most eclectic. He was an avid sky diver, a member of the Moose Jaw Sky Diving Team, (breaking several records as they soared over the Saskatchewan landscape); a member of the Saskatchewan Gun Club; the Moose Jaw Pipe Band, (playing the pipes over the phone to Mum as she proudly followed his growing repertoire); a member of the Royal Canadian Legion, a member of the colour party and the annual poppy drive.  He loved golfing, fishing and camping. Exercise was a key part of his daily regimen, walking 5 Km every morning, winter and summer. He was always the big brother to his two siblings, offering a helping hand when needed. He described himself as a simple man, a “home body” who enjoyed the simple things in life. His thoroughness in investigating to understand all that he undertook was truly amazing. Jim is predeceased by his parents and younger brother, Peter (Scotty). He is survived by his twin sister, Jean and his brother, David; nephews, Arleigh and Lawson and niece, Debbie and their families will greatly miss him, but will carry him in our hearts always.  The family wish to thank the Pioneer Lodge staff, for their compassion and caring of Jim, the local hospital ICU surgical staff and medical team, the FHHR home care support staff and all the auxiliary staff (paramedics, pharmacists, receptionists, laboratory personnel). We would also like to thank the managers at Chez Nous, Crescent Park Villa, Marcie’s Private Care Home and the GM and support staff at West Park Crossing; great neighbours, Lorne and Jan and best friends, Brian and Jeanie. A Celebration of James’s Life will be held on Thursday, June 13th, 2019 from 2:00 – 4:00 PM at the Moose Jaw Legion, 268 High St W, Moose Jaw SK.  Legion Rites will be conducted by Moose Jaw Legion Branch #59.  Those so wishing may make a donation in Jim’s name to the The Lung Association of Saskatchewan 1231 8th Street East Saskatoon, SK, S7H 0S5 or to The Poppy Fund c/o The Royal Canadian Legion Branch #59 268 High St. W. Moose Jaw, SK S6H 1S8 or to a charity of one’s choice.  Arrangements are entrusted to Moose Jaw Funeral Home, 268 Mulberry Lane. Todd Sjoberg, Funeral Director 306-693-4550