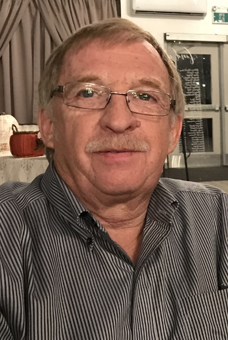 It is with great sadness that the family of Judson (Jud) Wayne Ringer announce his passing on Thursday, May 13th, 2021 at the age of 74 years.  Jud was born on August 15th, 1946 in Yarmouth, NS.  He grew up and received his education in Shelburne, NS before coming west to Calgary, AB, where he married his wife of 51 years Jerene on May 2nd, 1970.  In 1973 Jud and Jerene relocated to Moose Jaw, SK where they raised their only son Brandon.

For 51 years Jud was a member of the Plumbers and Pipefitters Local 179.  He initially started his career with Busse Bros Plumbing and Heating before moving to Moose Jaw Plumbing and Heating, where he remained for 39 years.  Over the years he was trusted and respected by his customers, who would call him year after year for his guidance and expertise.

Jud was an avid Moose Jaw Warriors fan and Booster Club Member since the beginning.  He would be seen regularly at every home game selling 50/50 tickets and walking the rink before each puck drop.  Jud was active in the community and was a cub and scout leader for many years, and then as Wagon Master within the Good Sam Camping Club.  After his retirement, Jud and Jerene enjoyed traveling and exploring Canada with their RV every summer.  In his downtime he could always be found in his garage or walking his beloved dog Jake.

The family would like to say a special thank you for the support from Dr. Janessa King, Dr. Khan and the team at the Allan Blair Cancer Center, and the wonderful team from Moose Jaw Home Care.

A Private Family Graveside Service will be held at Sunset Cemetery.  Flowers are gratefully declined.  As an expression of sympathy, donations in Jud’s name may be made to The Lung Association of Saskatchewan, 1231 8th St E, Saskatoon, SK S7H 0S5.  Arrangements are entrusted to Moose Jaw Funeral Home, 268 Mulberry Lane.  Todd Sjoberg, Funeral Director 306-693-4550.