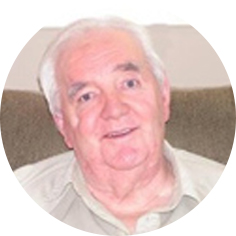 It is with great sadness that we announce the passing of William John (Bill) Richardson on Monday October 13, 2008 at the age of 73, in Saskatoon at the Royal University Hospital.Bill was born to Anna and William Richardson Sr. on April 28, 1935 in Moose Jaw where he lived most of his life. Bill worked as an Engineer with the CPR and strongly supported his local Union. He spent endless hours dedicated to his passion for building and renovating properties in the area. Bill was keenly interested in local and professional sporting events; cheering on the Roughriders and the Warriors at every opportunity. He paid close attention to what was happening in the world and was generous in sharing his perspectives with family and friends on world events and political happenings. Bill was predeceased by his Father William Sr., Brother Allan and Wife Lorraine. He is survived by his Mother Anna; Daughter Tamara(Paige); Step Son Mark; Sister Pat; Brothers Doug (Laura), Wayne (Helen) and Ron (Gloria); 6 Nieces and 6 Nephews and numerous Great-Nieces and Nephews. In lieu of flowers, Friends so wishing may make donations to “The Sherbrook Foundation”, 401 Acadia Dr., Saskatoon, Sask. S7H 2E7. A Memorial Service will be held Friday October 17, 2008 at 10:00 a.m. in Moose Jaw Funeral Home, 268 Mulberry Lane, Moose Jaw, Sask. Pastor Larry Hasmatali will officiate. Interment will follow in Rosedale Cemetery.