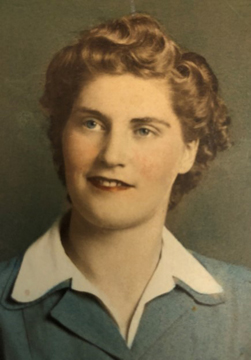 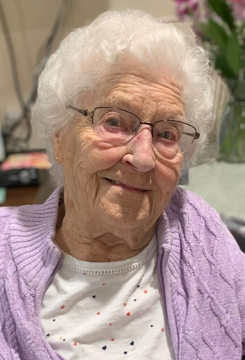 Born at Findlater, SK at SC 15, TP 20, RGE 25, West of 2nd on March 26th, 1924.  Heaven welcomed another angel on Thursday August 11th, 2022.  Clara passed at The Meadows in Swift Current, SK after a long and fulfilling life of being a school teacher, farmer’s wife, Mom to Carol, Grandma to Aaron and many adopted daughters.

She was predeceased by her husband, Ben in 2008; parents, Anton and Julia Sigmeth (née: Fuchs) from Austria and Hungary; all her 7 siblings and many farm pets.  Clara is survived by her daughter, Carol (Randy McFadden); grandson, Aaron; as well as many nieces and nephews and many special friends.

Clara and Ben were married in 1946.  Clara started teaching school at South Lake and Elk Head schools and farming in the Tuxford area.  She was a long time TOPS member, was associated with the Moose Jaw Exhibition Board, and was a great cook being able to whip up a delicious meal fresh from the garden.  She hauled grain from the combine, milked cows, and helped with harvest back to the days of stooking.  Anyone could come to her with a problem and she would have a solution.  Clara’s hobbies were sewing, crocheting, talking on the telephone, and going to dances with Ben.

Special thanks to all the caregivers at the Meadows in Swift Current.