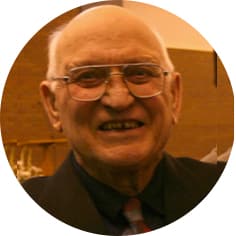 Earl Potter, born September 4th, 1919 near Langbank, SK, passed away October 17th, 2011 in Broadview, SK.  Earl leaves to mourn his passing, his sisters, Thelma Potter and Maggie Horn of Whitewood, SK and his sister Lorna Rashleigh of Three Hills, AB; and many other relatives and friends.  He was predeceased by his father, Harvey Potter; his mother, Alice Potter and his sisters, Iris Horn and Eileen Sawyer.  Earl accepted the Lord in his life at age 16.  He taught Sunday School and took various other church positions.  He worked at Maryfield, Kenosee and Echo Lake Bible Camps over a period of 23 years.  Earl farmed near Langbank and Wapella for 40 years.  In 1941 he was drafted into the Canadian Armed Forces and was stationed in Regina, Dundurn, Saskatoon and Red Deer until his discharge in 1945.  In 1955, he began to volunteer his winters on the maintenance staff of Briercrest College and Seminary in Caronport, SK – this generosity would continue for 54 years.  The Funeral Service will be held on Thursday, October 20th, 2011 at 2:00 p.m. in the Edwards Chapel at Caronport, SK.  Dr. John Barkman will officiate and interment will take place in the Caronport Cemetery.  In lieu of flowers, donations in Earl’s name may be made to Briercrest College and Seminary, 510 College Drive, Caronport, SK S0H 0S0, Kenosee Lake Bible Camp, PO Box 217, Kenosee Lake, SK S0C 2S0 or Echo Lake Bible Camp, PO Box 2174, Fort Qu’Appelle, SK S0G 1S0.