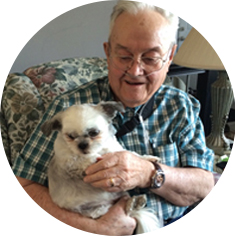 It is with great sorrow that the family of Charles Edwin Porter announce his peaceful passing at Dr. F.H. Wigmore Regional Hospital on Friday, September 1st, 2017 after battling cancer for almost a year.  Charlie (as he preferred to be called) was the youngest of 5 children, and was born November 29th, 1930 at Perdue, SK.  He grew up in the Feudal area where his parents farmed.  Charlie and his parents tried farming in British Columbia, but came back to Saskatchewan where they purchased a farm near Wilkie.  Charlie married Shirley Baron on his 25th birthday in 1955.  Cheryl came into their lives in 1968.  After retiring in 1993, they moved to Saskatoon where they lived for the next 25 years.  Almost every summer they went RVing South with Shirley’s sister Audrey and Rod Peat, and had many memorable trips.  In 2015, they moved to Moose Jaw to be closer to Cheryl.  Charlie was a very kind man, worked hard all his life and did it all on his own, he never wanted to be beholden to anyone.  He had a good sense of humour, loved to tell stories of the “good old days”, and always had a dog, his Chihuahua TJ passed away last year at the age of 17.  He was predeceased by his parents, Bill and Elsie Porter; brothers, Albert and Herb; sister, Dimp; and son-in-law, Darren Chase.  Charles leaves behind his wife of almost 62 years, Shirley; daughter, Cheryl Chase; granddaughter, Alexis; and sister, Mary Kirkland.  The family would like to thank the staff at Palliative Care, Dr. F.H. Wigmore Regional Hospital, and especially Dr. Vermaak and Dr. Nuels.  A Graveside Service will be held on Thursday, September 7th, 2017 at 3:00 p.m. in Sunset Cemetery, Moose Jaw, SK.  As an expression of sympathy, donations in Charlie’s name may be made to a charity of one’s choice.  Arrangements are entrusted to Moose Jaw Funeral Home, 268 Mulberry Lane.  Gary McDowell, Funeral Director 306-693-4550