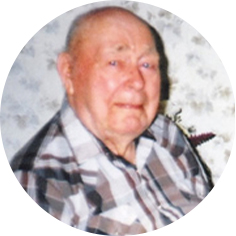 Bud Pope of Moose Jaw and formerly of the Tugaske District passed away on Friday, December 12th, 2008 at the age of 88 years. The Funeral Service will be held on Saturday, December 20th, 2008 at 2:00 p.m. in the Tugaske Community Hall. Rev. Rick McCorrister will officiate and interment will take place at Tugaske Cemetery. Bud was predeceased by his mother and father John and Lillian Pope; wife Mary; and sisters Winnie Love and Myrtle Pope. He is survived by his sisters Margaret (Len) Bieller, Audrey Johnson (nee Hartell), Irene (Ted) Nielson; several nieces, nephews and other relatives. Bud farmed in the Tugaske area all his life. He served in the RCAF from 1941 to 1945. He enjoyed playing cards and won many cribbage tournaments. He and Mary enjoyed many trips together to warmer climates. Bud will always be remembered for his unique sense of humor. The family would like to thank everyone at Chez Nous, Extendicare and Providence Place who played such an important part in Bud’s life. For those so wishing donations may be made in Bud’s memory to the Alzheimer Association of Saskatchewan Inc., 301 2550 12th Ave., Regina, Sask. S4P 3X1.