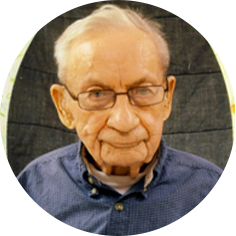 On Saturday, August 2nd, 2008 at the Moose Jaw Union Hospital after a long and productive life, Jack gently left us to join his wife of 47 years, Oma Robinson. The Funeral Service will be held on Saturday, August 9th, 2008 at 1:30 p.m. in the Moose Jaw Funeral Home, with Pastor Bill Luther officiating. Legion Rites will be observed by Roscoe Steele of the Royal Canadian Legion Branch #59. A time of Visitation for family and friends will be held on Friday, August 8th, 2008 from 7:00 to 8:30 p.m. at the Moose Jaw Funeral Home. Jack was born on October 29th, 1918 in the Sugarloaf District, Galilee, Saskatchewan. He married in 1948 and continued to farm and raise cattle on the land he loved, until the age of 87 years. Dad lived to work and was happiest when he was sitting on the combine or the tractor. A gentle man, a man of integrity and honour, he loved his family unconditionally. Predeceased by his parents, Robert and Jane Pickard; his wife Oma in September of 1995; brothers Cyril, Samuel, Mervin, Ralph and Victor Pickard; and sister Millie Harrison. He is lovingly remembered by his daughter Colleen (Lorne) Voinorosky of Battleford, Saskatchewan; son Rod (Alison) Pickard and granddaughter Madaleine of Canmore, Alberta; sisters-in-law Virginia and Phyllis Pickard, Zena, Edna and Myrtle Robinson, Gertrude Ward; brothers-in-law Eddie Harrison, Ronnie Robinson and Barclay Ward; extended family and numerous friends. Their lives were strengthened and enriched by Jack’s kindness and generosity. The family is deeply grateful to the staff at the Prairie Villa Personal Care Home, the Assiniboia and Moose Jaw Hospitals and Guardian Grove at Providence Place for their special care of Jack. Those so wishing may make a donation in Jack’s memory to the Moose Jaw Health Foundation, 455 Fairford St. East, Moose Jaw, Sask. S6H 1H3.