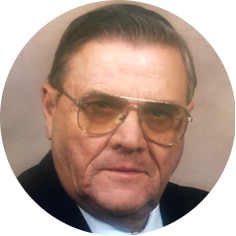 Ralph Harry Peterson late of Regina, SK, formerly of Moose Jaw and Central Butte, SK, passed away on Tuesday, December 25th, 2018.  He was predeceased by his wife of 74 years, Betty just 3 months ago; parents, Hilda (Nellie) and Gus Peterson; sister, Edith Anderson; and granddaughter, Crystal Simons.  Ralph is survived by his daughter, Cheryl (Greg) Johnston; son, Robert (Angie) Peterson; daughter, Diana Simons (Doug); and son, Randy Peterson (Louise); 7 grandchildren and 15 great grandchildren.  Ralph was born on the family homestead near the Tugaske and Central Butte area, where he farmed until his retirement.  Ralph and Betty resided in Moose Jaw for over 35 years until their move to Regina in 2014 to be closer to family. Ralph was a great farmer, but his true passion was sports.  He curled but especially loved baseball and hockey. Ralph was very proud of his time with the Lake Valley and Moose Jaw Lakers baseball teams. He played during baseball’s golden era in Saskatchewan, when many great American-based teams barnstormed across Western Canada in the 40’s and 50’s.  Memories of those baseball days were precious to Dad and he entertained us with many stories of games, plays and players that he loved and respected and which we will certainly miss. Ralph was inducted into the Saskatchewan Baseball Hall of Fame in 2002 in recognition of his contribution to the sport as a player and builder.  As well as his involvement in baseball, he was also a long-time hockey coach and scout. He was the longest serving coach of the Central Butte Flyers Senior Hockey Club (1959 – 1979). He was also the coach for the midget Flyers team for many years and was especially proud to guide the team to a Provincial Championship in ‘74/75.  Ralph served on the executive for the Moose Jaw Canucks of the WCHL and their SJHL club and he later began his scouting career with the team. Ralph was a long time scout in the WHL for the Saskatoon Blades, Regina Pats, Brandon Wheat Kings and the Red Deer Rebels; and the Estevan Bruins, Nipawin Hawks and Battleford North Stars of the SJHL.  His involvement in sports blessed him with many life-long friends that he respected and cherished.  A Celebration of Ralph’s Life will be held on Saturday, January 12th, 2019 at 1:00 p.m. in the Harvey Room at Moose Jaw Funeral Home.  Our sincerest thanks to the staff at College Park I and II for all their loving care during our parent’s time in Regina.  We would also like to thank the staff at the Pasqua Hospital for their kindness during Dad’s final days. In lieu of flowers, donations in Ralph’s name may be made to a charity of one’s choice.  Arrangements are entrusted to Moose Jaw Funeral Home, 268 Mulberry Lane. James Murdock, Funeral Director 306-693-4550