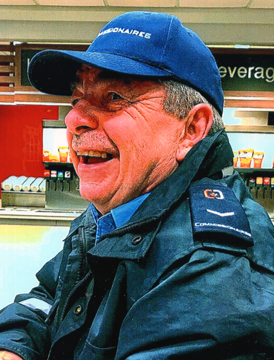 It is with heavy hearts we announce the passing of William (Bill) Perry, aged 70 years of Mortlach, SK, on Saturday, December 17th, 2022 after a long, courageous battle with cancer.  He kept his sense of humour to the end.

Bill was born on HMCS Bonaventure, Stadacona, Halifax Harbour, Nova Scotia on February 27th, 1952.  His father was in the Navy, so it was no wonder he went to serve in the Canadian Armed Forces as a Peacekeeper in 1969.  As a military family, they moved around quite a bit.  Bill went to school in West Ward, Orillia, Ontario.  He played hockey from a young age, as well as soccer.

Bill moved west in 1983 with his daughter Michelle after he lost his wife.  Here in Moose Jaw, SK he remarried and coached soccer for Moose Jaw Youth Soccer.  When he moved to Assiniboia, SK, he coached the Assiniboia High School Girl’s Soccer Team.  Bill joined the Assiniboia Rebels Booster Club upon arrival and served with them until 2013.  Bill had attended Pambrum College and took Sports Medicine so he would be qualified to look after any injured players.

Bill was always very conscientious and community oriented, always offering to help putting floats in parades, as well as sitting on various boards and committees.  He always lent a hand, whether at branding or helping someone fasten rafters or whatever.  He was also on the fundraising committee for Ecole Ross School, raising money to purchase playground equipment for the children while in Moose Jaw.

Bill also drove for Moose Jaw Taxi for a number of years and he received the nickname of Wizard.  He also worked and helped out at a number of businesses in the City of Moose Jaw, including Nick’s Family Restaurant.

When the Moose Jaw Warriors moved to the Crushed Can in 1984, Bill became a Booster Club member and an off-ice official from 1984-2022 before moving to Assiniboia.  He served as Treasurer of Assiniboia Metis and helped them with fundraising and Fish Fries, and also helped out cooking at St. Victor’s Boogie.  He was a great manager and owned Willy’s Fish and Chips, but when the owner reneged on the sale of the property, Bill bought Prairie Produce.  He also managed Assiniboia Subway until 2013 when he had become sick.  He made it a very successful business under his management.

Bill met his wife Jean in Assiniboia where they did everything together.  When he returned to the Moose Jaw area (Mortlach), he again joined the Moose Jaw Warriors Booster Club and helped out with selling 50/50 tickets.  You would always find him cooking at the Warrior tryouts as he was a great chef.  He volunteered on the MacDas committee in Mortlach and helped bring in the vendors for the Saskatoon Berry Festival.  He was also “Santa” at the Town and Country Mall in Moose Jaw for a number of years, as well as at a number of houses, schools, and other functions though out the city, Mortlach and Chaplin.

Bill was a respected Core Commissionaires Representative in Moose Jaw from 2016 until his passing.  He was also a Security Guard for both Manitoba and Saskatchewan.  He spent his last years at Social Services in Moose Jaw.

Bill reorganized the New Southern Plains Metis Local #160.  He recorded minutes and posted the elections for officers in various papers.  On October 1st, 2016 Bill was voted in as president.

Upon arriving in the small town of Mortlach, Bill and Jean fell in love with the town and neighbours.  He helped build a fence around our yard, as well as our privacy fence.  Bill was known as a chef but was very capable in other areas of life as well.

The family would like to thank the Allan Blair Cancer Society, Saskatchewan Telemiracle, Home Care Services, all of the nurses and doctors, the neighbours who blew snow so we could get out, helped Jean with her projects, stayed with Bill so Jean could go to town for groceries, giving her a shoulder to cry on or just being there, as well as to everyone involved including family and friends.