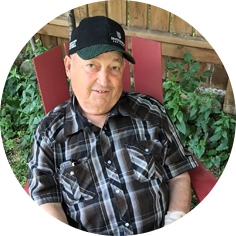 It is with great sadness that Jean (John) Marie Perrault passed away suddenly on the 1st of August 2019 with his wife and family by his side.  John was born to Jean and Jeanne Perrault on June 30th, 1945.  He was predeceased by his parents; brother, Leo; and sister, Alice.  John was born and raised in Val Marie, SK. He later moved to Moose Jaw, SK and became a bricklayer by trade.  John worked in Moose Jaw in his early years but spent most of his working career in Banff, AB as Project Manager at Sulphur Mountain.  In John’s retirement, he and Judy returned to their hobby farm near Moose Jaw, where he had a love for animals which kept him busy on the farm.  John was constantly working on a new project and loved having the help of his grandchildren and great-grandchildren. John was never afraid to try new things and took pride in teaching his family new skills.  John had a great sense of humour and often gave people nicknames, he had names for all his favourite people. John loved his family and he will be greatly missed at the many family gatherings where his extended family would get together to share a meal, especially dessert.  He was always there to listen and was known by his family for his quick quips and no nonsense. Spending quiet time with his wife Judy playing cards, doing puzzles, reading or having a good nap were some of John’s favourite things to do in his down time. John looked forward each week to working at the Caron landfill.  It was a highlight of his day when families came to visit, and he had treats for all the children. John will be remembered by his wife of 54 years, Judy; sons: Johnny, William, and Simeon (Elizabeth); daughters: Kathleen (Ray), Nicole, and Cindy (Gordon); grandchildren: Courtney (Jarrett), Johnny (Tyanna), Amanda, Nathan (Nikki), Veronica (Jesse), Andrea (Mitch), Zachary, Kyle (April), Ryan (Laura), Laera, Katrina, Hamish, and Abbey; 8 great-grandchildren: Avery, Alyssa, Kohen, Xavier, Braxton, Hunter, Hannah, and Hailey; sister, Adele Bono (Joseph); as well as numerous nieces, nephews and cousins.  In keeping with John’s wishes, a Private Family Service will be held.  As an expression of sympathy, donations in John’s name may be made to the Caron Community Church, Box 102, Caron, SK S0H 0R0.  Arrangements are entrusted to Moose Jaw Funeral Home, 268 Mulberry Lane. Calvin Gammel, Funeral Director 306-693-4550.