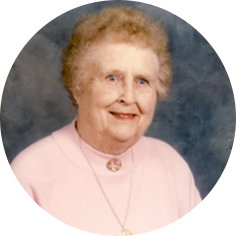 It is with deep sadness that we announce the passing of our dear Mother and Grandmother, Doris May (Philpott) Paton of Central Butte Regency Manor. Doris passed away peacefully on March 3rd, 2008 in Regency Manor. Doris was born on March 1st, 1912 to Maud (Kingsnorth) and William Philpott in Strasbourg, Sk. She was the second of four children. The family moved to the Central Butte area in 1928. Doris married Joe Paton in 1934 and they farmed all their life in the Central Butte area. They raised two children, Gwen and Jack. Doris tended a large garden and a beautiful yard with flowers and shrubs and fruit trees. In 1968 they took a holiday with their friends and neighbours, Norm and Lois Woodburn to England and Scotland, where they visited all the relatives from the old country. Doris corresponded with these family members until the present time. Joe and Doris retired from the farm in 1978 to Central Butte. They enjoyed their large house and hosted numerous family gatherings and visitors. Retirement gave them time for card playing and community involvement. Doris was active in the community in many organizations. She served as Secretary of Lawson United Church Board and was a member of the Lawson U.C.W. Joe and Doris joined the Central Butte Seniors Club and it was their honor to cut the ribbon for the official opening of the new Seniors’ Centre in 1989. Joe and Doris moved to a smaller house in Central Butte to accommodate Joe’s mobility. Again the yard was clipped and adorned with flowers and trees. In 1991 Joe passed away leaving Doris to spend a few more years in their home alone. Doris read, spent hours taping music from the radio, tended her flowers and garden and visited with her neighbours and family. She watched the news everyday and avidly followed the politics of Saskatchewan and Canada. In 2005 Doris moved into Iver Main Place as one of the first residents. She enjoyed many friendships there including other residents and staff. She kept busy reading and listening to music and visiting. She wrote poetry and had a poem published by Poetry Institute of Canada as well as having stories published in “The Senior” newspaper. In September 2007 Doris was hospitalized and moved into Regency Manor for further care. As her health weakened her mobility, her mind remained sharp and her days were best spent visiting. On March 1st, 2008 Doris celebrated her 96th birthday. Doris was visited by friends and family and staff from Regency Manor throughout the day. Her journey was near the end. It had been a life well lived. Doris Paton was predeceased by parents, William and Maud Philpott; parents-in-law, John and Euphemia Paton; husband Joseph in 1991; sons-in-law Herb Jensen, Bev White and daughter-in-law Gloria Paton; grandson Corey Jensen; great grandson Eric Kurz and great granddaughters Kathy and Kristen Struck; brothers and sister-in-law Charlie and Evelyn Philpott, Enid and George Gould; brother and sister-in-law Tom and Elsa Paton; brother-in-law John Sandercock. She is survived by her daughter Gwen Jensen (Ivan) Macklin and son Jack (Frieda) Paton; grandchildren Heather (Ken) Kurz and Larissa, Patti (Pat) Struck and Aaron, Blaine and Kyle; Colin (Jennifer) Jensen and Nicolas, Tucker and Lauryn; Derek (Candace) Paton ad Mandy and Ashley; Denise (Tim) Sawers and Kayla and Jordan; brother Edgar (Lily) Philpott and many nieces and nephews; sisters-in-law Peggy Sandercock and Jean Paton. The Funeral Service will be held on Wednesday, March 5th, 2008 at 2:00 p.m. in the Central Butte United Church, Rev. Rick McCorrister officiating. Memorial donations in Doris’ name to Iver Main Place, Box 550, Central Butte, Sask. would be appreciated by her family.