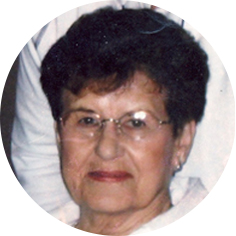 Our most dear wife, mother and grandmother, Mary, passed away on Monday, July 10th, 2017 at the age of 91.  Mary was predeceased by her parents, James and Dorothy Rekunyk; brothers, Pete and Paul; in laws, Jack and Annie Ozog; sister-in-law, Joan Ozog and son-in-law Jay Burton.  She is survived by her loving husband of 66 years, Cecil; children, Larry and his children Amy and Cassie, Ron (Kathy) and their children Allison and Rob, Janice Burton, Darlene Ozog, Lori (Terry) Hetke and their children Morgan and Jordan, Chris (Mary Ann) and their children Talissa, Kaegan and Saige, Pat (Andy) Kindiak and their children Jake and Ava; two sisters, Lena (Ron) Wilson, Elsie (Gord) Gleim; sister-in-law, Marg Rekunyk as well as numerous other relatives.  Mary was born into this world on December 23rd, 1925 at the family farm south of Moose Jaw.  She was the eldest daughter and developed an early hard work ethic helping out on the farm.  She attended the nearby one room school house before moving to the city at age 17.  Mary worked as a nanny and bakers assistant and eventually at the Moose Jaw woolen mills during WWII.  Mary loved to keep active and enjoyed horseback riding and was an accomplished ball player.  Those early years were tough but happy times.  She and husband Cec met at the local dance hall and after a five year engagement, married in 1951.  Shortly after that they started their family of seven children and Mary settled into her new career as a homemaker.  Family always came first.  No matter what time of the day or night there was always coffee on and homemade chocolate cookies in the fridge.  Few left the house without of loaf of Mary’s fresh baked bread, and then there were those weekly family gatherings with all the trimmings of an Easter dinner.  Mom’s family included many four footed friends from Cooter the cat to Duke the dog, she had a soft spot for animals.  Mary always maintained a strong relationship with God and her church.  She was a long standing member of the CWL and St. Joseph’s Church.  As Mary slipped into that obscurity known as Alzheimer’s disease, she still kept her faith, hope and kindness.  The Funeral Mass will be celebrated on Tuesday, July 18th, 2017 at 1:00 p.m. in St. Joseph’s Catholic Church, 1064 3rd Ave. NW, Moose Jaw, SK. Father Rick Krofcheck will be the presiding celebrant and a private family interment will take place at Rosedale Cemetery. A Prayer Service will be held on Monday, July 17th, 2017 at 7:00 p.m. in Moose Jaw Funeral Home.  Flowers are gratefully declined. As an expression of sympathy, donations in Mary’s name may be made to the Alzheimer Association of Saskatchewan 301 – 2550 – 12th Ave Regina, SK S4P 3X1 or The Moose Jaw Humane Society Box 1658 Station Main Moose Jaw, SK S6H 7K7.  Arrangements are entrusted to Moose Jaw Funeral Home, 268 Mulberry Lane.  Todd Sjoberg, Funeral Director 306-693-4550