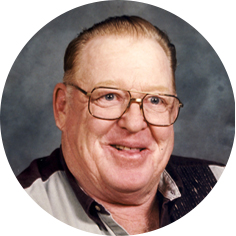 It is with great sadness that we announce the passing of Gerald Clifford Nurse.  He passed away peacefully on Monday, February 18th, 2019 surrounded by family.  Gerald was born May 21st, 1935 to Lloyd and Mae Nurse on the family farm at Tyvan, SK.  He moved to a farm south of Fillmore, SK when he was two years old.  Gerald attended school at Fillmore and during this time he developed his strong love of sports and animals.  After leaving school, Gerald worked various jobs including trucking and at the Ast’s Department store before his love of animals took him back to farming.  In 1958, Gerald married the love of his life and best friend Shirley. Together they were blessed with three daughters and one son. They spent 50 years on a mixed farm outside Fillmore and moved to Moose Jaw in 2015 to be closer to family.  Gerald’s sporting career spanned over 50 years including hockey and baseball. The last 29 years were spent with the Fillmore Old Timers Baseball. He was active in the community serving on many boards and spent 33 years on the RM of Fillmore Council as both Councillor and Reeve.  Throughout his life, Gerald enjoyed the many visits from his family to the farm. The grandkids spent numerous hours breaking and fixing things, learning to drive, having bonfires, building forts, feeding cattle, and helping Grandpa with whatever projects he had going on. He enjoyed his daily visits to the Post Office and then to Osage for coffee and the latest news.  His favourite family moments were sharing meals in the field during harvest and the family get togethers during holidays throughout the year. Gerald travelled the province for the Twiliter’s Baseball tournaments for many years, which later turned into trips to the Casino. He was predeceased by his daughter, Cleone; parents, Lloyd and Mae Nurse; brother, Ken Nurse; nephew, Wes Foss; his recently deceased niece, Bev Ogden; special friend and cousin, George Gillies; as well as many special four-legged friends including his last travelling companion, Freddie.  Gerald is survived by his wife of 60 years, Shirley; daughter, Penny (Darwin); son, Perry; daughter, Donna; and son-in-law, Brian Phillips (Janet); grandchildren: Bart (Lisa), Justin (Renita), Nathan (Natalie), Therin (Kimberley), Cole, and Maddison; great-grandchildren: Carter, Kailynn, Kenzie, Isabelle, Rhett, Hunter, Abigail, Keslar, and Tate; special 4-legged companion, Punk; sisters-in-law, Mary Nurse and Maxine Foss; as well numerous nieces and nephews.  The family would like to thank the staff of Extendicare in Moose Jaw for the wonderful care he was provided during his stay for the past three years. They became part of our family. A Graveside Service and a gathering will be held at a later date.  Flowers are gratefully declined. As an expression of sympathy, donations in Gerald’s name may be made to the Allan Blair Cancer Centre c/o Pasqua Hospital, 4101 Dewdney Ave, Regina, SK S4T 7T1, The Moose Jaw Humane Society, Box 1658 Station Main, Moose Jaw, SK S6H 7K7, or to a charity of one’s choice.  Arrangements are entrusted to Moose Jaw Funeral Home, 268 Mulberry Lane. Todd Sjoberg, Funeral Director 306-693-4550.