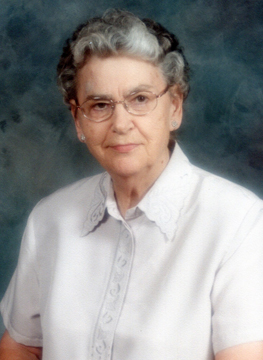 Fern was raised in the Guernsey area and attended Waterloo school and later Business school.  As a young adult, Fern lived and worked in Ontario for several years before returning to Saskatchewan.  She worked at Progressive Tire in Moose Jaw until marrying Leslie in 1955.  During her years at Briercrest, Fern became a life member of the United Church Women.  She was an avid cook and baker, cooking for friends and farm crews.  She enjoyed tackling a variety of projects including furniture refinishing and making her own cheese, to name a few.  She had a deep love for all animals and for reading.  Fern was very independent and described by those who met her as feisty.  She was the oldest of her family and outlived all her siblings.  The family would like to thank Doctors Geyer, Ramadan, and Fynn for all their care over the years.  Also, thanks to the staff of Pioneer Lodge and Crescent Park Retirement Villa for their compassionate care.

The Funeral Service will be held on Friday, October 21st, 2022 at 11:00 a.m. in Moose Jaw Funeral Home.  Reverend Tim Ellis will officiate and interment will take place in Rosedale Cemetery.  Those not able to attend are able to view the service virtually by going to www.moosejawfuneralhome.com/webcast/.  As an expression of sympathy, donations in Fern’s name may be made to SCRAPS (Stray Cat Rescue and Protection Society), Box 1653, Moose Jaw, SK S6H 7K7.  Arrangements are entrusted to Moose Jaw Funeral Home, 268 Mulberry Lane.  Gary McDowell, Funeral Director 306-693-4550