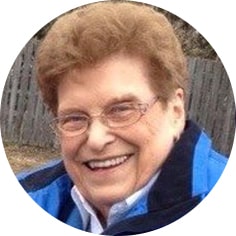 Edith Olive Moysey, aged 89 years of Moose Jaw, SK passed away peacefully on Saturday, October 5th, 2019 at the Dr. F.H. Wigmore Regional Hospital.  Edith was born in Moose Jaw on December 13th, 1929 to John and Iona Chapman (née: Gallagher).  She was raised on the family farm near Marquis, SK.  Edith enjoyed working with her parents on the family farm, working in the field and with the animals.  She attended school in Marquis and Tuxford, SK, then continued on to Normal School in Moose Jaw, obtaining her teachers certificate, and began teaching in several rural communities.  She married Fred Moysey of the Buffalo Pound Lake district and this is when she became a fulltime farm wife retiring from teaching. Their first home was at the Moysey homestead east of Tuxford.  They moved to her parent’s farm in 1956 after the death of her father. This was to become their home until 1985. Three children were born to them: Wayne, Randy and Sandra. She continued to enjoy farming, gardening, family events and many social activities.  Many hours where spent curling and volunteering at the Tuxford rink and golfing in Moose Jaw. In 1985 they made the move to Moose Jaw, purchasing a home on Dahlia Crescent. It was the perfect location at the time as they were able to see the country side across the street.  Many new friendships where made on Dahlia, along with these new friendships where the old friendships of country neighbors who also lived on the block. Life was busy for Edith. Family gatherings were important to her and she loved the family visits, along with regular outings with the girls, card nights, golfing, suppers, aqua size and many other activities.  It was sometimes difficult to find her at home. She was predeceased by her husband, Fred (2006; brother, Wesley Donald (1937); parents, John (1955) and Iona Chapman (1988); Iona’s second husband, Robert Kears, (1976); and Fred’s parents, Leonard (1973) and Ada (Heath) Moysey (1987). Edith’s pride and joy were her family and she will be lovingly remembered by her children: son, Wayne (Kim) and their children Kelly (Kevin), Curtis (Stacey) and Erin; son, Randy (Lori) and their children Amanda (Tim), John (Ashley), Brett (Kayla) and Dustin (Morgan); daughter, Sandra Flory (Bruce) and their children Theo and Wyatt; as well as many great-grandchildren who held a special place in her heart.  A special thank you to the Five Hills Health Region Doctors and Nursing Staff, Caleb Village and West Park Crossing. Your kindness did not go unnoticed.  The Funeral Service will be held on Saturday, October 12th, 2019 at 11:00 a.m. in Moose Jaw Funeral Home.  Celebrant Dave Foley will officiate and interment will take place at St. Columba Cemetery.  In lieu of flowers, donations in Edith’s name may be made to STARS Air Ambulance, 2640 Airport Road, Regina, SK S4W 1A3.  Arrangements are entrusted to Moose Jaw Funeral Home, 268 Mulberry Lane. Andrew Pratt Funeral Director 306-693-4550.