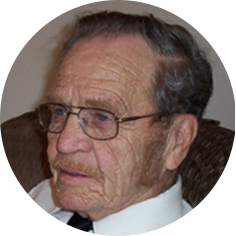 Following a brief illness, Douglas Moser passed away at Chateau St. Michael’s in Moose Jaw, SK in the early morning of Friday, May 20th, 2016, at the age of 85 years.  A born storyteller, Doug regaled family and friends with tales of his beloved Saskatchewan until the end, when his body could no longer keep up with his lively mind.  He was predeceased by his loving wife, Elva.  Doug will be missed by his children: Joanne Moser (Paul Heeney), Terry Lynn Anderson, and Garnet and Terry Moser; grandchildren: Aaron, Craig, Vincent, Ceilidh, Talia, Leith and Jason; great-grandchildren: Annastasia, Morgan, Mackenzie, Dilynn, Austin, Kiera and Abigail; great-great-granddaughter, Spencer; sister, Joan Smith; nephew, Allen Smith; and niece, Beth Sheeler.  A life-long resident of southern Saskatchewan, Doug taught school for 35 years, most of them in Chaplin.  The Moser home was next door to the school and for years, Doug and Elva received visits from former students who would fill them in on their lives after graduation.  While teaching was his occupation, Doug’s passion was farming.  Born on the farm, he worked side by side with his father for decades.  When Doug retired from teaching in 1984, he was able to work full time on the land for nearly a decade until an injury cut short his second career.  That did not stop him from tinkering.  Doug could repair just about anything, from a faulty light switch to a transmission on a combine.  He built houses, restored antique clocks and gramophones, and patiently refinished old furniture.  When he ran out of projects, there was always an auction to attend, a chance to buy other old things that could use a little repair and restoration.  The family would like to express their thanks to Julia Koudelka, Christine Mackie, and the staff of Chateau St. Michael.  The Funeral Service will be held on Saturday, May 28th, 2016 at 1:30 p.m. in the Chaplin Community Complex, Chaplin, SK.  Pastor Marvin Seaborg will officiate and interment will take place in Chaplin Cemetery.  In lieu of flowers, donations in Doug’s name may be made to a charity of one’s choice.  Arrangements are entrusted to Moose Jaw Funeral Home, 268 Mulberry Lane.  Calvin Gammel, Funeral Director 306-693-4550