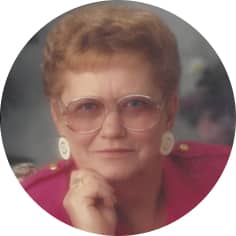 Shirley Darlene Morrison (née: Reid), aged 79 years of Moose Jaw, SK passed away at Pioneer Lodge on Monday, September 2nd, 2019 after a short battle with cancer.  She passed away just one month shy of her 80th birthday.  Shirley was born October 1st, 1939 in Ceylon, SK to Marie Lillejord and Arnold Reid.  She was predeceased by her son, Devonne in 1959; father, Arnold in 1959; brother, George in 1962; mother, Marie (Lillejord) Reid Sandruk in 1976; father of her boys, Tommy in 1990; and sister, Madeline Magnuson in 2012.  Shirley is lovingly remembered by her sons and their families: Greg (Fay) and their children Jannelle and Marshall, Larry (Michele) and their children Chelsey and Jarret, and Don (Lisa) and their children Breanna and Jenaya; and her nieces, Rose (Tom) Jones of Red Deer, Alberta and Verla (Vern) Remple of Abbotsford, BC.  Shirley grew up and went to school in Bengough, SK before marrying Thomas Lawrence Morrison in 1955. They moved to Moose Jaw in 1960 where Shirley worked at Valleyview Centre and then Woolco for 18 years, where she worked as Manager of Personnel.  After Woolco closed, she worked at the Golden Nugget Casino as a dealer, Smith’s Electric and Moose Jaw & District Seniors as a bookkeeper, and at the ANAVETS as the Secretary/Manager. Shirley was known for her strong opinions as an advocate for social issues in Moose Jaw.  She lobbied local and provincial politicians to keep the Hyperbaric Chamber at the Moose Jaw Hospital. Shirley was a driving force behind the Pioneer Village residents association, fighting for rent stabilization and other tenant rights. She was a regular contributor to the Letters to the Editor column in the Moose Jaw Times Herald and would call in to voice opinions on the John Gormley show when the topics got her fired up.  She wrote many letters to politicians and companies to draw attention to injustices. Over the years, Shirley volunteered with St. Johns Ambulance, the Moose Jaw Singles Club and the Arthritis Society. Shirley also served as Secretary/Treasurer for the Moose Jaw Take Off Pounds Sensibly (TOPS) group for fifteen years. Shirley will be missed by the friends she made throughout her life. Those meetings and casual conversations won’t be the same without Shirley’s lively dialogue!  Shirley’s family expresses their gratefulness to the caring staff in the Memory Care Unit at the Pioneer Lodge, especially Tessa, Margot and Gail who brought smiles to Mom in her last days, and Dr. Miller, Dr. Durond and the staff in the surgical unit at the Dr. F.H. Wigmore Regional Hospital for their excellent care. The Funeral Service will be held on Saturday, September 7th, 2019 at 1:30 p.m. in Moose Jaw Funeral Home with Pastor Walter Engel officiating.  In lieu of flowers, donations in Shirley’s memory may be made to the Allan Blair Cancer Centre c/o Pasqua Hospital, 4101 Dewdney Ave, Regina, SK S4T 7T1 or the Arthritis Society of Canada, 393 University Avenue, Suite 1700, Toronto, ON M5G 1E6.  Arrangements are entrusted to Moose Jaw Funeral Home, 268 Mulberry Lane. Todd Sjoberg, Funeral Director 306-693-4550.