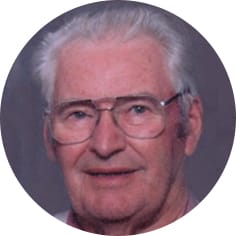 With sadness we announce that George Murray Cruden Morrison, aged 96 years of Moose Jaw, SK passed away peacefully on Thursday, January 9th, 2020 at Extendicare, with family by his side.  He was predeceased by his parents, William and Isabella; wife, Muriel; and brothers: Bill, John and Alex.  George is survived by his daughter, Glenys (Ron) Rollie; son, Derek (Valerie); grandchildren: Michelle (Aaron) Welsh, Shawn (Karla) Rollie, Haig (Momoko) Morrison, and Keegan (Joyce) Morrison; and great-grandchildren: Clarissa, Tyler, Emily, Cheyanne, Camryn and Megan.  George was born in Rouleau, Saskatchewan. In 1936, at age 13, he returned to Scotland with his parents. At age 17 he began work as a mechanic in Ellon, Aberdeenshire. It was during this time that George met a pretty young lass named Muriel Watt and they were married in 1948.  The family later moved to Laurencekirk, Kincardineshire. In 1964 the family immigrated to Moose Jaw and George began work as a mechanic. In 1975 he and his partner, Jim Charters, opened Palliser Service on Caribou Street West. George had many interests; he was a member of the Kiwanis Club, was one of the founding members of the Scottish Society, was an ardent volunteer at MOTIF, and loved to dance.  George was in Extendicare for five years and we would like to thank the staff for their exceptional care and compassion. A Celebration of George’s Life will be held on Friday, January 24th, 2020 at 1:30 p.m. in the Harvey Room at Moose Jaw Funeral Home.  Pastor Marvin Seaborg will officiate and a private family interment will take place at Rosedale Cemetery.  As an expression of sympathy, donations in George’s name may be made to The Moose Jaw Humane Society, Box 1658 Station Main, Moose Jaw, SK S6H 7K7.  Arrangements are entrusted to Moose Jaw Funeral Home, 268 Mulberry Lane. Michelle Surtees, Funeral Director 306-693-4550.