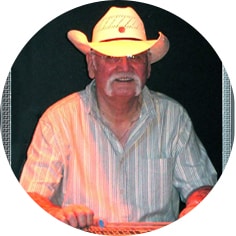 It is with heartfelt sadness to announce the passing of our father, husband, grandfather and great-grandfather, Sangador Joseph (Joe) Morin on Wednesday, June 26th, 2019.  He was predeceased by Joe Morin, Virginia Carrier, and Robert Guest.  Joseph is survived by Carole Morin, Lennard Morin (Dena), David Morin, Clayton Guest (Leanne), Lorrena Morrison, D’Jango Brideau, Robert (Kari), Duran, Wade, David, and Tyler; and great-grandchildren, Austin and Ayden.  Joe was born in Cumberland House, Saskatchewan on May 2nd, 1932.  At a young age of 16 years he left home to make a life for himself.  He worked a variety of jobs until he signed up and joined the Canadian Army.  He joined the Queen’s Own Rifles as an infantryman. Joe toured the globe in his role, he performed peace keeping in Cypress, and fought in the Korean War where he was a #2 mortar man.  Moving forward, he served in Germany where he started his family. When his European tour of duty was completed, he returned to Canada and eventually ended up in Moose Jaw. After being in the military, he took a civilian job at the 15 Wing Moose Jaw Air Base until his retirement.  In 1973 Joe met the love of his life, Carol. He then asked for her hand in marriage and his life path was set, as he now was the proud head of the household with a family of 7. All through his life the one thing that remained constant was his never-ending love of music. He used to play in pubs and gatherings during his younger years.  Joe joined several groups in the 70s and eventually set out on his own. He formed groups like Urban Cowboy, Country Blaze, and finally Southern Prairie. He couldn’t go far without his dearest wife Carole, she picked up the bass guitar and got into the act and joined Country Blaze and the two played together for 25 years. The steel guitar became his final passion and the rest was history.  Joe traveled a few times to the United States to attend steel guitar conventions, where he met some of the cream of the crop steel players in the country music industry, leaving him with fond memories. Joe was a generous man, he had several players come and go through the years who he played with. His passion for playing was only outdone by his generosity to his players. He loved to coffee downtown where his clan of local players of the time would get together to visit and gossip.  He had a tight circle of friends back then. All through his life he never forgot about his roots. He was an active member of the Legion, Eagles and a proud attendee of his Queen’s Own Rifle reunions, where he got a chance to reminisce with his fellow soldiers. Joe was a decorated solider with many medals detailing the various campaigns in the Army. He was a Metis Elder and took part in various functions. Joe will be sadly missed by a great many. In keeping with Joe’s wishes, a Private Family Service will be held.  As an expression of sympathy, donations in Joe’s name may be made to The Moose Jaw Humane Society, Box 1658 Station Main, Moose Jaw, SK S6H 7K7.  Arrangements are entrusted to Moose Jaw Funeral Home, 268 Mulberry Lane. Michelle Surtees, Funeral Director 306-693-4550.