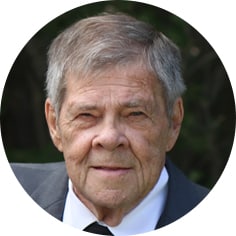 It is with great sadness that the family of Larry Franklin Moffatt announce his passing on April 14, 2020, after a short battle with cancer at the age of 82. Larry was predeceased by his wife, Gloria Moffatt, his parents, Florence (Wright) and Keith Moffatt and his brother, Grant Moffatt. He will be lovingly remembered by his 2 daughters, Darla (Ron) and Leanne (Mark), granddaughter, Abigail, as well as his siblings, Bill (Shirley), and Marg (Al), sister-in law, Cathy, as well as numerous nieces and nephews, and his good friend, Mark Belanger. Larry was born in Rosetown and grew up on the family farm near Elrose, where he and Bill not only worked hard, but played hard, and trouble always seemed to find them. He taught high school for about 10 years where he met the love of his life, Gloria. Larry and Gloria settled in Moose Jaw to start their family and his career with Social Services. He was passionate about providing community supports for people with intellectual disabilities. Larry was well known and respected throughout the province as an advocate for people with disabilities, and was happy he was able to see the closure of Valley View Centre during his lifetime so that the individuals could live a full life in their community. Larry worked in Human Services for over 30 years and retired as the Executive Director of Community Living Division.  Another passion of his was woodworking, where he was able to create beautiful pieces of art. Many people have been fortunate to receive a piece of his work. After retirement, Larry was still involved with different agencies that support people with intellectual disabilities and most recently joined the Board of Directors at Diversified Services. A Private Family interment will take place at Moose Jaw Funeral Home Columbarium with a Memorial Service to be announced at a later date. Donations in Larry’s name may be made to Moose Jaw Diversified Services, 11 Wood Lily Drive, Moose Jaw, Saskatchewan, S6J 1H1. Arrangements are entrusted to Moose Jaw Funeral Home, 268 Mulberry Lane. Andrew Pratt Funeral Director 306-693-4550.