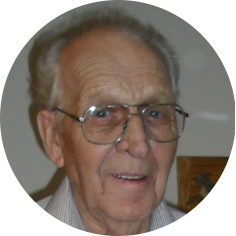 It is with sadness that the family announces the passing of Selmer Moen on Saturday, November 28th, 2020 at Chateau St. Michael’s in Moose Jaw, SK at the age of 99 years.  He was predeceased by his wife, Barbara (2014); parents, Syver (1969) and Annie (1983); sister, Velma (2018); brother, Melvin (2020); half-brothers: Russell (1997), Oliver (1987), and Lawrence (1970); and half-sister, Alice (1980).  Selmer is survived by extended family members in Canada, USA, Australia, and Norway.  Selmer was born on the family farm near Hazenmore, SK on February 17th, 1921.  He married Barbara in 1945.  They moved to Calgary, AB in 1948 and lived there until 2008 when they moved to Caronport, SK, and two years later to Moose Jaw.  Selmer was an avid woodworker, curler, and automobile enthusiast.  He spent much of his retirement time doing wood working for the Glenbow Museum and volunteering at Heritage Park, both in Calgary.  Selmer loved family gatherings, and was a very welcoming host to relatives and friends from near and far, particularly from Norway.  Selmer owned and operated a fuel delivery service in Calgary for many years.  Special thanks to the staff at Chateau St. Michael’s for the care he received in his final days.  Due to Covid-19 restrictions, a Celebration of Selmer’s Life is not able to be held at this time.  As an expression of sympathy, donations in Selmer’s name may be made to a charity of one’s choice.  Arrangements are entrusted to Moose Jaw Funeral Home, 268 Mulberry Lane.  James Murdock, Funeral Director 306-693-4550