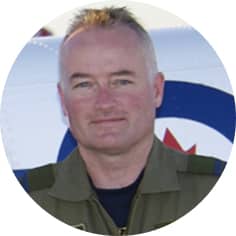 Captain Bryan “Mav” Mitchell of 15 Wing Moose Jaw passed away suddenly on October 9, 2008, in Moose Jaw, SK. at the age of 46. The Celebration of Life Service will be held on Friday, October 17, 2008 at 3:30 p.m. in the Moose Jaw Alliance Church (corner of 9th Ave. N.W. and Thatcher Drive).  Capt Padre Joe Almeida will officiate.  Bryan is survived by his wife of 22 years, Melody, and his two daughters, Milann (age 16) and Kiera (age 12); his parents, Gail and Rick Nesimiuk of Bangkok, Thailand; two sisters Kara (Todd) Nesimiuk of Doha, Qatar; Marlea (Darren) Ward of Brampton, ON.; Melody’s parents Ken and Lillian Anderson of Calgary, AB; brothers-in-law Garth (Pam) Anderson of Calgary, AB; Mark (Carmen) Anderson of Edmonton, AB.  He is also survived by 5 wonderful nieces who loved him very much.  Capt. Bryan Alexander Mitchell was born on December 27, 1961 in Red Deer, Alberta.  He first enrolled in the Canadian Forces on January 24, 1983 under the Officer Candidate Training Plan (OCTP) program as a pilot (32U).  He completed his pilot course, February 15, 1985.  He went on to complete the Basic Helicopter Course October 26, 1985 and was subsequently posted to 427 tactical Helicopter Squadron Petawawa on September 5, 1985.  He was posted to the Multinational Force and Observers-Middle East (CCMFO) on September 15, 1987 until he was posted to 2CFFTS Moose Jaw July 15, 1988 as an instructor on the C-114 Tutor training jet, achieving his A1 instructor rating.  From April 1, 1993 until April 7, 1995 Capt Mitchell was selected for an exchange posting to Scampton, UK.  In April 1995, he returned to Canada and was posted to CFB Calgary, where he took his release.  Following his release, Capt Mitchell was part of the British Aerospace System based out of Riyadh, Saudi Arabia from 1995 until he returned to Calgary in 2004 to rejoin the Canadian Forces.  He was re-enrolled on July 23, 2004 under the Direct Entry Plan and was subsequently posted to 2CFFTS Moose Jaw August 16, 2004 as a flying instructor where he once again achieved his A1 Instructor Rating.  Capt Mitchell was selected for a coveted tryout for the Snowbirds in the spring of 2008.  On August 15 of this year, he was posted to 431(AD)Sqn and would have been a member of the 2009 air demonstration team.  Bryan was a devoted husband, father and considered a best friend too many.  He had a great sense of humour and loved to banter.  He was a very humble and compassionate man.  He attacked life at full throttle, having a passion for fast cars, bikes and jets.  Bryan took pride in his career, knowing that his role in the Armed Forces was an important one.  He was a great pilot and leader.  Bryan was passionate about flying, although his death was tragic, he absolutely loved what he was doing.  Most importantly, he was devoted to his family and took great honour in building a strong family in faith.  All who knew Bryan, will remember him as a man of great faith.  Although he may be gone, we know where he is.  As an expression of sympathy contributions/donations may be forwarded to Mission Aviation Fellowship of Canada, 264 Woodlawn Road West, Guelph. ON. Canada N1H 1B6 or Food For The Hungry International “Nesimiuk Ministry”, Peace Portal Alliance Church, 15128-28 Ave. Surrey, B.C. V4P 1P2.