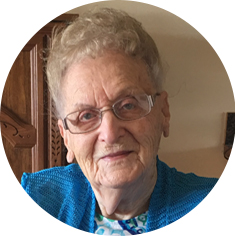 Pearl worked hard in the field and she was a fantastic cook. A close friend once said Pearl reminded her of Jesus who fed 5000 with a couple of fish & five loaves of bread.  A multitude of people would unexpectedly stop by at meal time.  Pearl would have one small chicken in the oven. Suddenly, a miracle would take place! A feast would be laid out before them. Everyone would be well fed and chicken would be left over.

Life wasn’t all work. Pearl and Percy enjoyed travelling, curling, square dancing and playing card games with family and friends in Avonlea. Pearl also curled with the ladies. In recent years she played cards almost 6 nights a week in the social room at her apartment in Moose Jaw.

Pearl’s grandchildren and great-children became an important part of her life. Crossword and crib competitions were fun along with her chocolate pies, tarts, buns and an endless list of desserts.  Near the end she cherished each phone call and exchange of “I love you”.

In lieu of flowers, those wishing to donate may do so to the Avonlea United Church.  Arrangements are entrusted to Moose Jaw Funeral Home, 268 Mulberry Lane. Gary McDowell, Funeral Director 306-693-4550.