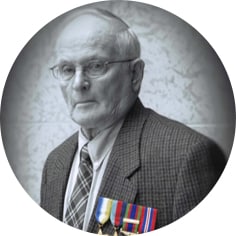 It is with sadness we announce the passing of George Sutherland Donn Miller on Saturday, January 11th, 2020 at the age of 94 years.  He was predeceased by his wife, Jeanne Miller; parents, Lillian and George Miller; and sister, Muriel Miller.  George will be lovingly remembered by his son, George (Kathryn) Miller; daughter, Beverley Miller; grandchildren, George (Elizabeth) Miller of Toronto, ON and Sarah Miller of Regina, SK; great-grandson, Geordie Miller of Toronto, ON; sisters-in-law: Carol Balon, Millie Scott, and Marion Balon; along with numerous nieces and nephews.  George was born in Melville, SK and then moved to Regina. At nineteen he enlisted with the Royal Canadian Navy and served on HMCS Puncher from 1943-1945. After returning from the war he resumed work with the Canadian National Railway for 39 years.  He retired as a conductor at the age of 58. George’s retirement years were spent living at Buena Vista, SK until 2014 when he moved to Moose Jaw, residing at the Caleb Village. His final years were spent in the care of Providence Place in Moose Jaw.  The family greatly appreciates the care received while at Providence Place by the staff and by Dr. K. Dautremont. At George’s request, no formal service will be held.  A private family gathering will take place at a later date.  In lieu of flowers, memorial donations may be made in George’s name to the Providence Place Recreational Therapy Department, 100 – 2nd Ave, NE, Moose Jaw, SK S6H 1B8.  Arrangements are entrusted to Moose Jaw Funeral Home, 268 Mulberry Lane. Andrew Pratt Funeral Director 306-693-4550.