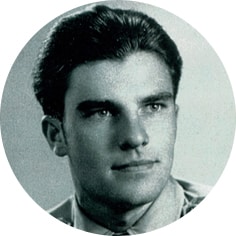 John Mikula, age 93, passed away peacefully on Sunday, December 22nd, 2019 at Providence Place in Moose Jaw.  He was predeceased by his brother Aleksander, and two sisters, Genia and Natalie.  He is survived by his wife of 66 years, Maria (Minnie) and children Randy (Jennifer) Mikula, Sandra (Gerry) Duggleby, and Shelley (Greg) Mikula.  He will be dearly missed by all including his nine grandchildren and three great grandchildren.

Dad was born in Haczyska Poland on November 14th, 1926.  Life on the farm with his mom, dad, 2 sisters, and brother was very happy.  One of his best memories of life in Poland was food, especially when his mom baked bread in the brick bake oven which was eaten with fresh buttermilk.  Dad often told us how the food on the farm was so good he could still taste it, and how he thought they were the most fortunate people in the world.

When he was 9 years old, Dad was given a prophecy by one of the ladies in the village who said that his wife was somewhere out in the world, still in a crib, and that he would go out into the world and be rich.  Dad always said that he was the richest man in the world, and that you don’t have to have a lot of money to be rich – Faith in God and in yourself, and having a good outlook and attitude in your life is all you need to be rich.  Rich is the peace, love, and joy that only God can give. Dad’s positive attitude, love of life, love of food, and his faith in God touched everyone who met him. Dad thought he led an interesting life and that penchant for understatement was part of his sense of humour.

On July 7th, 1942, the Gestapo came to the house on the farm looking for Dad’s older sister to take to Germany.  Dad jumped at the chance for adventure and offered to go in her place. They agreed – he was just 14 years old and barefoot when he was loaded into railway box cars headed for Germany.  Little did he know what was ahead of him. The prophecy was about to begin to come true, and Dad would need every ounce of Faith to carry him through.

Dad spent the rest of WWII in forced labour on a farm in Germany, where he suffered from beatings and lack of food.  He constantly dreamed of one day having enough bread to eat, and always had faith that things would get better.

Just before the war with Germany ended, Dad was liberated by the Americans – Dad was a free man at last!  He prayed, thanking God for saving him through the war. On June 22nd, 1945 he joined the American army, where he was posted for guard duty of the German SS prisoners of war in Dachau, Germany.  There were 45,000 SS prisoners in the hospital, which was heavily guarded with barbed wire and manned with machine guns. Dad saw the Dachau death camps and was responsible for guarding some of the monsters who ran them.  After his service in the Army, Dad had some choices about where to go, and Christmas 1948 was Dad’s last Christmas in the American army before emigrating to Canada in May 1949. Dad spent his early days in Canada working on a farm in Dahlton Saskatchewan, and logging in Ontario before settling in Moose Jaw where the rest of the prophecy was about to be fulfilled.  On October 11th, 1952, Dad met the love of his life, Minnie, at a dance at Temple Gardens.  Dad loved to tell us the story of how they met – he and his friend Anton noticed two girls sitting by themselves.  They looked so innocent, and Dad and Anton asked if they could join them. Dad liked Minnie at first sight. She was bubbly and lots of fun!  Their love story continued and on July 11th, 1953, Dad and Mom got married.  Their love story is an inspiration to everyone who knew them, and they were blessed to celebrate 66 years of marriage this past July.

Dad worked as a Carman at the CPR until he was 59 years old.  He loved going to work every day, and made many lifelong friends there.  He always said that if you love what you do, you will never work a day in your life

Dad would say that what made him the richest man in the world, were his 3 children and the subsequent blessings of 9 grandchildren and 3 great grandchildren.  He called us a blessing from God, and he always reminded us to Love One Another.  Dad was an accomplished carpenter, and all our homes are filled with beautiful furniture for our houses which is a reminder of a wonderful man. Perhaps his greatest moments as a carpenter were the 2 houses he built from scratch, one at 330 Grandview Street West, and the second right next door at 338 Grandview Street West, where Dad and Mom lived until just a few years ago.

Dad’s next great love was hunting and fishing with his friends known as his fishing buddies.  Many entertaining stories came from those trips, as well as plenty of meat and fish that the whole family enjoyed.  Dad’s passion for good food lasted his lifetime. When his Mom passed away in Poland, he built a brick oven in our backyard as a memorial to her.  He often said he could still smell the aroma of his Mom’s homemade bread every now and again. We were lucky to be treated to Dad’s homemade bread, baked just like in Poland, as well as his homemade deer sausage, smoked in his hand made smokehouse that he designed into the bake oven.

Dad’s passion for gardening also meant we had fresh vegetables every summer, and frozen and canned ones from the garden all year round.  Dad’s favourites were his swiss chard and of course cabbage and potatoes. Every grandchild remembers summers in his garden, pulling out fresh, sweet carrots to be eaten on the spot.  No carrot will ever taste so good.

Dad had a positive attitude and love of life that meant every moment should be celebrated.  The smallest things would often be celebrated, even a simple meal. Dad would say, “This calls for a shot of scotch!”  Every birth, baptism, new house, and almost every meal was celebrated with scotch. We thank you Dad for always reminding us that all moments in life are to be celebrated, and that forgiveness, faith, and love are part of each and every day.

Dad will be greatly missed by his wife Minnie; his 3 children Randy, Sandra, and Shelley and their spouses; his 9 grandchildren Sarah, Andy, Kelly, Scott, Paul, Tim, Lucy, Nataysia and Ameia; and his 3 great grandchildren Ailsa, Francis and Elliott.  We will leave you with Dad’s words: My father often quoted Jesus’ command to us children and I pass it on to you:  Love One Another

Keep smiling, Love One Another, and Count Your Blessings.
We love you Dad,
Randy, Sandra and Shelley

Special thanks to the entire staff at Providence Place, (especially St. Anthony’s wing) for their loving care and support.