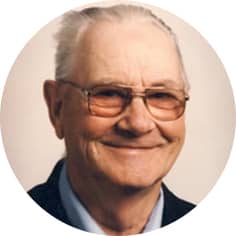 Raymond LaRoy Mergel passed away at the young age of 84 in the Moose Jaw Union Hospital on Wednesday, April 23rd, 2008. Raymond was born and raised at the Elk Horn ranch in the Wood Mountain area. He helped on the family ranch until he served in the Canadian Army in the 2nd World War. Raymond met Mary (Lemon) while working in Moose Jaw. They were married June 21st, 1952. In 1953 they moved to Alberta where Elaine, Brian, Floyd and Leona were born. In 1968 they moved the family back to the hills at Wood Mountain. Raymond worked for his brothers and sisters on the Ranch and also held many other jobs in the area. Raymond was a hard worker and held a variety of labour jobs after moving the family to Moose Jaw where they finally settled. Raymond loved animals, fishing, hunting, and visiting with his friends from coffee row. He also enjoyed time spent at the lake with family and friends having a beer and playing cards. The last of the Mergel family of twelve, Raymond was predeceased by his mother Lydia and his father Bill in 1959, brother Percy in 1967, sister Etta Showalter in 1975, brother Tim in 1975, brother Defon in 1981, brother Morris in 1990, brother Kenneth in 1993, sister Edna in 1997, sister Ida Thomson in 1998, sister Laura Schwartz in 1999, brother Vernon in 2002 and sister Grace Mergel in 2002. Also predeceased by Granddaughter Tasha. Raymond’s legacy includes 6 children, 10 Grandchildren and 17 Great-Grandchildren. He is survived by his loving wife of 55 years Mary, daughter Elaine (Bryon) Tyers and their family Shannon (Blaine), Cameron and Mason, Christine (Jason) and Sophie, Ashley (Ben) Ryland and Karson, son Brian (Patty), Sheridan and Weston, son Floyd and daughter Leona (Cal), Kenton, Kayla and special four legged friends Star and Nikita. Also remembered by daughters Sharonand Murial, their families as well as numerous nieces and nephews. In keeping with Raymond’s wishes, there will be a private family service and cremation will follow. As an expression of sympathy contributions may be made to the Heart & Stroke Foundation of Sask., 2360 2nd Ave., Regina, Sask. S4R 1A6