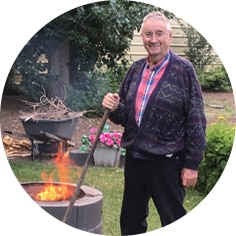 Murray Charles McRoberts, aged 81 years, of Moose Jaw, Saskatchewan passed away peacefully on Sunday, January 26th, 2020 surrounded by his family.  Murray was born to parents Charles and Emily McRoberts on July 9th, 1938 in Dauphin, Manitoba.  He farmed in the Dauphin area for several years where he and his cousin, Gary McRoberts, would race up and down the country roads and ditches just for fun.  Murray ventured from the farm and worked in Brandon selling furniture for a few years before moving to Moose Jaw, where he built his business, McKarr’s Home Furnishings.  He married Erna (Rausch), who survives him, on September 30th, 1960.  They were inseparable to the end.  They worked together and they played together.  Together they built a wonderful family, a large circle of friends and a good business which is still in the family.  Murray is also survived by his loving sister, Shirley Ratz of Brandon, Manitoba and her children, Larry and wife Joan of Rivers, Manitoba and Janice and partner Davin of Brandon, Manitoba; his forever loving children, Pam Butler and her husband Jay; son, Todd McRoberts, as well as eight grandchildren and 14 great-grandchildren, all of Moose Jaw.  Murray was predeceased by his parents Charles and Emily; and great-grandson, Thomas Connatty.  Murray loved people. His business and hobbies always surrounded Murray with people. Whether he was selling a sofa or setting up the trailer at a new campsite, Murray was always making new friends.  He will be missed by his numerous camping friends and business associates. Spending time around the campfire with Erna and kids was Murray’s happy place, flipping burgers, roasting hot dogs on a stick and toasting marshmallows.  He wouldn’t let you leave. Cold? Here’s a jacket. Tired? Here’s a sleeping bag. Thirsty? Well, let’s have one more! The family would like to extend their gratitude to the staff at Extendicare and the nurses at the Dr. F.H. Wigmore Regional Hospital for their caregiving during the time Murray spent with them.  A Celebration of Murray’s Life will be hosted by the family on Friday, January 31st, 2020.  Come and go any time from 2-5 p.m. at the Grant Hall Hotel, 401 Main St N, Moose Jaw, SK.  The family insists that people make donations in support of the Heart and Stroke Foundation, Unit 26 – 1738 Quebec Ave, Saskatoon, SK S7K 1V9, in lieu of sending flowers.  Arrangements are entrusted to Moose Jaw Funeral Home, 268 Mulberry Lane. Todd Sjoberg, Funeral Director 306-693-4550.