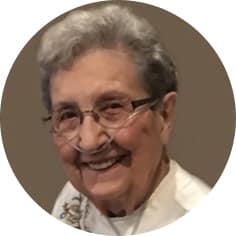 Dolores Louise McRitchie, aged 91 years of Moose Jaw, SK passed away peacefully on Wednesday, August 14th, 2019 with family by her side.  Dolores was born on July 12th, 1928 in Moose Jaw, SK to Cliff and Lucille Sparrow.  She went to elementary school at the Petrolia School, followed by Central Collegiate and then on to the Davidson Business College.  Dolores married Robert H (Bob) McRitchie on January 25th, 1952.  Together they welcomed their first child, Fran into the world on May 31st, 1955 and their 2nd child Mike on January 11th, 1960.  We were lucky enough to have Mom at home until we were in school, then she returned to work.  Over her career she loved being with people and enjoyed a good laugh with friends and co-workers.  Dolores worked in various positions including customer service at the Bank of Montreal and SaskTel, book keeping at Campbell Dixon Clothiers, and executive assistant at Canasphere Industries.  Dolores enjoyed sewing, baking and many crafts such as knitting and paper tole. Dolores believed life was made for family and friends. She spent many years helping look after grandkids, attending their sports, school pickups and other events.  In later years she really enjoyed having coffee and playing cards with friends. She was predeceased by her mother, Lucille Sparrow in 1976; husband, Bob McRitchie in 1980; father, Cliff Sparrow in 1986; brother, Gord Sparrow in 2008; and daughter, Fran McRitchie in 2013.  Dolores will be lovingly remembered by her son, Mike (Wanda) McRitchie; grandchildren: Brooke (Warren) Karst, Mike McRitchie, and Caitlin McRitchie (Logan Darbyshire); great-grandchildren: Bennett Karst and Theo Karst; as well as many other family members and friends.  We would like to extend a special thanks to Dr. A.J. Van Heerden, Dr. Omar Rodwan, and the staff at Memory Lane at Pioneer Lodge for the excellent care and compassion. The Funeral Service will be held on Saturday, August 24th, 2019 at 11:00 a.m. in Moose Jaw Funeral Home.  Pastor Marvin Seaborg will officiate and interment will take place at Sunset Cemetery.  Flowers are gratefully declined. As an expression of sympathy, donations in Dolores’ name may be made to a charity of one’s choice.  Arrangements are entrusted to Moose Jaw Funeral Home, 268 Mulberry Lane. Todd Sjoberg, Funeral Director 306-693-45550.