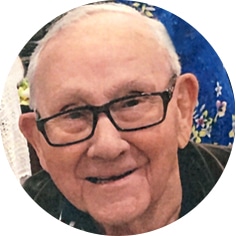 Donald Clarence McKim, aged 90 years of Regina, SK passed away peacefully on Tuesday, January 1st, 2019.  He was predeceased by his parents, Madeline and Frank McKim; and brothers: Marvin, Ken, Doug, and Hartley McKim.  Don is survived by his wife, Lillian McKim; children: Wade (Connie), Cyndi (Ben), D’Arcy, and Daren (Candace); grandchildren: Erin, Shaunna (Rick), Jordan, Lauren (Eric), Forrester, Chloe, Jenkins, and Shaelyn; and great-grandchildren: Jaxson, Lukus, Cruz, and Jett.  Don was born on March 6th, 1928 at the Regina General Hospital.  He grew up on the family farm in Riceton, SK where he loved helping on the farm, and was active in hockey and baseball.  Don attended school in Riceton. He met and fell in love with Lillian Monson from Lang, SK and they were married on October 22nd, 1949.  Don worked at various jobs before taking over as manager of the Riceton P&H Elevator in 1957.  In the fall of 1962, Don and Lillian moved to the McKim homestead, where he farmed and for 18 years managed the elevator.  In 1989, Don semi-retired from farming and they moved to Vancouver Island, BC until 2008 when they moved to Okotoks, AB. Don and Lillian lived there for 4 years before returning to Saskatchewan and settling in Regina.  In keeping with Don’s wishes, a Private Family Service will be held at a later date.