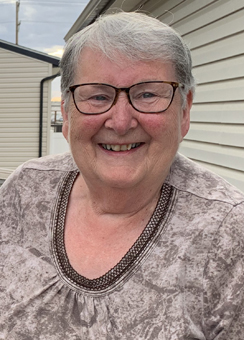 Maria Christina (Weinbender) McKay, aged 80 years of Moose Jaw, SK passed away suddenly at the Dr. F.H. Wigmore Regional Hospital in Moose Jaw on Tuesday, June 29, 2021.  Maria was born on May 15, 1941 in Chaplin, SK.  She was predeceased by her husband, Robert “Bob” McKay; son, Douglas McKay; parents, Jack and Lydia Weinbender; mother and father-in-law, Robert and Mary McKay; sister, Lynda Seibel; sisters-in-law, Gladys Eyres and Myrtle Metcalf; brothers-in-law: Robert “Norman” and Alfred in infancy, James and David “Bruce” McKay, Gordon Eyres and John Metcalf.  Maria attended school at Mount Rumble.  She completed her high school education via correspondence.  Education was very important to Maria and she continued after Grade 12 at the Moose Jaw Normal School receiving her teaching certificate.  After leaving school, she taught at the one room school at Stoney Beach, SK and then Victoria School at Droxford, SK.  Maria met her true love, Bob, while attending 4-H events at Frontier Days in Swift Current, SK.  In 1959, he realized she was the one and they were married on November 25, 1960.  Maria and Bob began their married life living at Log Valley, SK and at her parents’ farm.  In their early years, Maria and Bob spent two winters in Herbert, SK.  Maria and Bob had four children: Deborah “Debbie” in 1961, Douglas “Doug” in 1962, Richard “Rick” in 1963, and Robin in 1977.  Once the three older kids started school at Chaplin, Maria and Bob settled at their family farm south of Uren, SK where they spent 50 years grain farming and raising cattle.  During that time, Maria worked as a Kindergarten teacher in Morse, SK and then later a substitute teacher in Chaplin.  She also worked as a meat wrapper and store clerk at the Chaplin Locker Plant and was a Tupperware Consultant.  Her love for computers and technology led her to instructing various introductory computer courses at the regional colleges in Swift Current and Moose Jaw.  Maria was an active volunteer for the Chaplin Lutheran Church, Central Butte Regency Manor Auxiliary and various other community committees.  Maria had a love for music and travelled many miles with Pastor Marvin Seaborg as his musical “road show” organist.  In fall of 2013, Maria and Bob retired to the Prairie Oasis Trailer Court in Moose Jaw.  While in Moose Jaw, Maria became active with the senior group at the Cosmo Senior Citizen’s Centre playing floor shuffleboard, Moose Jaw Prairie Hearts Quilters’ Guild, and TOPS.  Maria also learned how to play Canasta and thoroughly enjoyed Monday card nights.  Maria loved living in her trailer, fondly referred to as the “sugar shack”, and all of the great memories she made there.  A milestone in her life was traveling to the Yukon with Bev and Ellis and spending the longest day of the year on top of the dome in Dawson City.  She cherished family gatherings and was so proud of each of her children and grandchildren, and attended numerous sporting events including figure skating, hockey, ball, dancing, soccer and curling.  Maria was an avid sewer, quilter, card maker and crafter.  She was fondly known to her family and friends as the “Quilting Queen”.  No better time was had then a shopping excursion to Mook Fabrics in Medicine Hat, AB.  Each of her quilting projects was an absolute work of art and will be thoroughly cherished by each of the members of her family.  Maria is survived by her children and their families: Debbie (Greg), Danielle (Jared) and Brynn, Alexandra (Daniel), and Chance; Rick (Jeannine), Meghan (Robbie), Raine, Ryder and Kennerley, Brett, and Madison; Robin (Derrick), Colton and Jaxon; daughter-in-law, Gaye, Dustin (Kahina) and Noah, Lucas (Kathleen), Kasey (Carson) and Bowen; her sister, Beverly (Ellis) Leaman; brothers-in-law, Henry Seibel and Gordon (Irene) McKay; sisters-in-law, Hilda Wishart and Sheila (Albert) Berger; as well as many nieces and nephews.  The family of Maria McKay would like to extend a heartfelt thanks to all the quilting ladies, TOPS gals, and shuffle board friends from the Cosmo Centre who made our mom love her years living in Moose Jaw.  Due to COVID-19, a Private Family Service will be held in Moose Jaw Funeral Home with Pastor Marvin Seaborg officiating.  Friends and Family are invited to view the service virtually on Saturday, July 10, 2021 at 1:00 p.m. by going to www.moosejawfuneralhome.com/webcast/.  In lieu of flowers, donations in Maria’s name may be made to the Chaplin Lutheran Church, Box 187, Chaplin, SK S0H 0V0 or Ernfold Cemetery Association, Box 324, Herbert, SK S0H 2A0.  Arrangements are entrusted to Moose Jaw Funeral Home, 268 Mulberry Lane.  Michelle Ellis, Funeral Director 306-693-4550