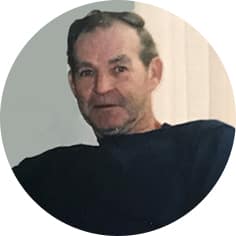 Aged 72 years of Moose Jaw, SK passed away peacefully with his family by his side on Saturday, August 24th, 2019.  Garry was born in Moose Jaw and raised on the farm in Caron.

Garry spent his career as a brick layer retiring from Walchuk Masonry in 2015. He was proud of his work and his work ethic was impeccable. He enjoyed time spent with his work buddies and they were like family to him. If you knew Garry, you knew he was a real Saskatchewan boy with a sarcastic sense of humor. He would do anything for his family and friends. Often his actions spoke louder than his words. He loved animals whether it was dogs, cats, birds and even squirrels. In his retirement, he enjoyed going to Bugsy’s for a few beverages with friends. Garry loved tv, especially shows that were about restoring cars, auctions and his newest favourite “Naked and Afraid”.

We would like to thank Dr. Dautremont, Dr Neuls, Dr Zarkovic and the wonderful Home Care staff especially Suzanne and Tamika. A special thanks to friends and family who offered their support throughout Garry’s illness.

He was predeceased by his brother Kenneth, mother Margaret and father Hank McDowell.